MEMBERSHIP
CONFERENCE
CONTESTS
CHAPTERS
STORYFEST
Home Blog ACFW Conference: from the Spouse's Perspective
Mmm, Ray thought he’d add his thoughts! This may be important for any non-writing spouses out there who are wondering about the worth of sharing the experiences of a conference – especially a Fiction writers’ conference. Have a smile! 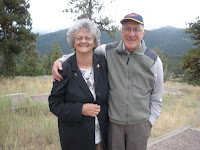 The excitement was building in Mary’s eyes. In my mind there was a touch of the Antarctic. The plane had touched down in Denver, Colorado and we two Tasmanians were about to experience ACFW. Those initials to the uninitiated do not bode ill. For me however, a mere male going to a Fiction Writers conference with his multi-published wife, it had the whiff of a dentist appointment.
Mary knew many of the authors through the internet and from reading their books. Me, I’m a romantic, not a Romance writer or reader – except my wife’s of course. (I added that last bit!) So I virtually knew no-one and clung close to Mary – I enjoy being close to her. Soon the warmth of the many women writers and the few male writers caused an inner climate change. I was readily accepted then recognized as the husband of Mary from Tasmania with a “Where is that exactly?” 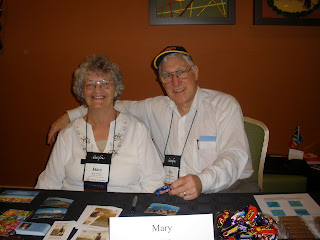 Involvement is the best way to break through the shyness barrier. Helping at the ‘Beyond Borders’ zone display table opened the way to meet and greet folk as they came pick up various give-aways and to taste our Aussie sweets – er…candy… to the Americans – plus New Zealand and Canadian goodies. I enjoyed doing that too as I chatted and chewed with folk at the other zone tables.
Boredom’s fear born before we flew out of Tasmania proved a figment of an overactive timidity. Going to the meetings, attending seminars with some appeal to my interests, talking one on one with folk from around the country and world, especially some of the guys was simply great. The common ground wasn’t so much the interest in writing, strong though it was, rather it was the unity of knowing Jesus as our Author and Perfecter. Wanting to make Him known through the various strands of writing simply gave added depth to most conversations. As I shared in the various sessions I began to imagine myself as a rival writer to Francine Rivers. That faded as soon as I picked up a pen. Where do those plots and characters and suspense with romance arise and flow through fingertips? I must ask Mary. My delight was seeing Mary’s unbridled pleasure in meeting other authors she had admired for years. Internet friendships strengthened by face to face encounters and new friendships formed which will span the oceans and years. Would I tag along with her to another writers conference? Definitely! Would I encourage other spouses to do the same? Yes! Why? It affords us the chance to understand our wife or husband’s ‘world’ and those who share it. An understanding of the pressures, challenges, pleasures and costs involved in being a writer with its highs and lows helps the non-writer to be more understanding and patient. This is so important when they wrestle with the story in the mind and the keys on the computer.
If more husbands of writers attended these Conventions, maybe the organizers would give us a session of our own. There we could tell our stories and have a seminar on ‘How to handle a wife who is a writer and not to imagine the computer as a competitor for her attention.’
Sharing this conference with Mary has allowed me to meet her comrades in writing, expand my understanding of their ‘world’ and have an enjoyable time with new friends. I’m saving up for another one!

Whoopee! Does that mean we’ll cross that Pacific Ocean again? I sure hope and pray so.