Most of us have heard the Christmas story. Even if you don’t subscribe to the whole message of a Christ child who was born to redeem and save a lost world, you most likely have some knowledge of the characters in the story—shepherds abiding in the fields, angel choirs in the heavens singing glory to God, a virgin girl with child riding a donkey into Bethlehem with her betrothed, innkeepers having no room in the inn, the baby lying in a trough, and three kings from the east following a star to where the Christ child lay. 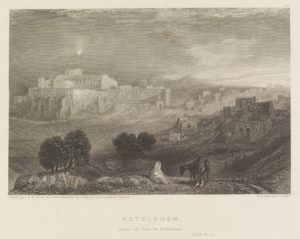 (See J. M. W. Turner’s early nineteenth-century depiction of Bethlehem as he sketched out and then painted in watercolors after visiting the Holy Land.)

Of all the characters that get center stage in the Christmas story, the ones that seem to get last billing are the innkeepers. I might even be so bold as to say that of all the characters in this fantastic drama, we like them the least. Have you ever considered their role? They were the villains of the story. After all, the innkeepers closed the door on poor Mary and Joseph at her most critical time and could merely offer a dirty, stinky cattle stall for a place to give birth. That certainly wouldn’t go over well in our Western demands for clean, sterile birthing rooms.

But what about the innkeepers? Can you really blame them?

Rome had decreed that a census must be taken. That’s why Mary and Joseph had traveled to Bethlehem from Nazareth to register their numbers like all the other families who had descended on that overcrowded little town just a few miles outside of Jerusalem.

Can you imagine the mass mayhem in that ancient town constructed of stone and adobe in Judea? Women in colorful robes and men in turbans combed the dusty streets in leather sandals, shoulder-to-shoulder, scouting out food vendors, fending off street peddlers, and holding on to their children for dear life. No doubt all of them scrambled for suitable accommodation.

The tired and harried innkeepers were doing the very best with what they had, weren’t they? They couldn’t take in everybody. They didn’t have time to waste on getting to know each one’s story. So, how could they have known how far Mary and Joseph had traveled, how wearying was their journey, or who the child was that Mary carried. No, most never considered who they had rejected on that Christmas eve, nor did they probably even care. Life would pass by in an endless blur of travelers seeking room in their inns no matter who had knocked on their door. 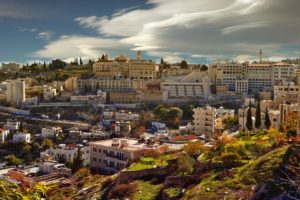 What would you have done if you were one of those beset innkeepers in Bethlehem more than two thousand years ago? What would you do today if someone knocked at your door and asked if you had room for the child who could change your life, set you free from all your burdens, and give you peace for all eternity?

Most of us as Christian writers believe God has given us a calling to write. In some ways, we are like the innkeepers. Many people come to our doorstep with a variety of wants and needs—some purely for entertainment, some in desperate need of refreshment. Whatever their reasons, our calling should provoke us to provide the kind of shelter that only comes from knowing Jesus. This Christmas, I invite you to make room for the Savior in your heart by spending time with Him, so that when people come to your doorstep, they will find a restorative balm that they will want to return to time and time again. I also encourage you to contemplate Innkeeper by Roger Emmerson as you celebrate Christmas this year.

Unlike the innkeepers of Bethlehem in the Christmas story, will you make room for the Christ child in your heart and at your doorstep this year? @DonnaWichelman #ACFWBlogs #writetip #critiques #ACFWCommunity Click To Tweet 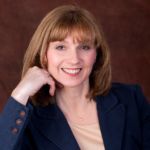 Donna’s short stories, essays, and articles have appeared in various inspirational publications, and she has two self-published books on Amazon.com. She weaves history and faith into tales of intrigue and redemption, reflecting the hunger in all of us for love, forgiveness, and belonging in a world that often withholds second chances.