I look through my kitchen window to the slopes of Angel Mountain (aka Mount Diablo in Northern California). A white cross rises in the green grass, recently watered with rain. I jot notes on a lined yellow pad.

I am in the home stretch of the first draft of my novel, Angel Mountain, 60,000 words and counting.

Last year, in these pages, I considered novel beginnings—Discerning, Designing, Defining, Dancing. I wondered where the story would lead me, or rather, where God would lead me in its telling.

I have learned in the process of watching and listening to dwell within a heart of humility, for if I had any sense of control over the writing of this novel, it soon disappeared with every bit of pretense and pride.

That’s not to say I sat back and waited for the right words to come upon me suddenly. I 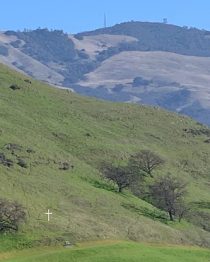 continued my research on the topic I believed I was called to write about—evolution, genetics, the compatibility of faith and science, Heaven and Earth, antisemitism and the Holocaust, gratitude, happiness, human identity, penitence and repentance. My characters made their opening appearances; my antagonist hovered nearby with menace. I could see where the novel was leading, but not where it would end. I sensed the crisis but not the details.

Over the summer I was challenged by many commitments that, for a Christian, were mandatory acts of love, either for family and friends, or for my faith community. These commitments continue to this day to escalate in number and importance.

How was I—am I—to finish this first draft? Time disappeared into the days and weeks and months. A writer needs time—time to reread what was written up to that point, time to reflect on the next scene, time to write that scene.

I decided not to worry. If God wanted this written he would provide a path for me to walk on, as our Anglican liturgy reminds us. I needed to trust and obey, for there was no other way.

So when I had an hour here and an hour there, I sat at my desk and took the next step on that path, not fully seeing where I was going.

The research was in my head, the characters were in my head, and the general storyline was in my head. Lord, what do you want me to say? How should it be said? Who is to say it? When and where?

I structured the novel around alternating close third person points of view: the four main characters. In addition, the antagonist would be given three scenes, inserted at the beginning, middle, and end to remind us how malevolent he is and why. The POV’s rotated in a regular order, so at least I knew whose POV was next.

So as I sat at my desk, trusting and obeying, I looked to see which character was in queue to speak. I asked myself, what must he or she do next to move the story along? For, as I recalled from workshops and classes, nothing should be wasted. All should be integral to the whole of the work. Set-ups must be paid off. Characters must meet one another and act and react to further the story.

But an amazing, angelic thing happened each afternoon that I attempted the impossible. The words came to me, the dialogue moved from my head, into my fingers, and onto the page.

So today, I can say that my story and I have finally arrived at the novel’s crisis/climax. I know how it will end, sort of. Which is good enough. And surprises are exciting. Not knowing everything can lead to miracles in the strangest places.

Angel Mountain is about Creation and the Lord of Creation. It is about our unique miraculous humanity, its evolution in time, and the stunning gifts we have been given, gifts of choice, reflection, consciousness. Life itself. We take these things for granted. We take for granted the seasons, the senses, the sun and the moon. Firestorms, earthquakes, and floods jolt us awake, call us to watch and pray, to be alert to each minute, hour, day of our lives, with thanksgiving.

With thanksgiving—Angel Mountain is also about gratitude for what we have been given, each breath of life, each second on Earth, leading us to Heaven.

I recently saw the movie, “Paul, the Apostle of Christ,” set in Rome during Paul’s imprisonment by Nero. Rather than Paul dictating to Luke what we know becomes the Book of Acts, in the movie the two converse. Occasionally, Paul pauses, then says quietly with emphasis, “Write it down.”

And keep a yellow pad at the ready, never losing sight of the Cross.

Trusting the Truth: How trusting God set me on the path to finishing my novel @Chrisunderland #ACFWBlogs #writing #encouragement Click To Tweet 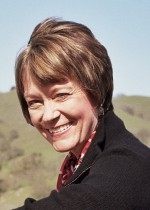