Ever tried the Big Squeeze object lesson? Present four identical sponges that have been soaked in four different liquids, each clear and visually indistinguishable from the others.

Ask participants if they can identify the liquids without smelling or tasting them. Answer: No.

Squeeze the first sponge with a fingertip and taste: Plain water. 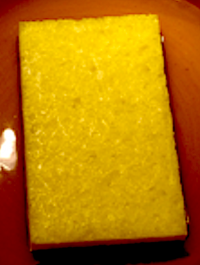 And the fourth: White Karo syrup.

Object lesson: Until our hearts undergo a big squeeze, we don’t know what they contain.

A few years ago, a real-life experience showed me what the big squeeze produced in me.

My goal: To attend a conference.

Squeeze 1: The cost. My husband had to massage the family budget to life support status.

Squeeze 2: My WIP. The night before departure, a fresh idea had inserted itself, and I itched to pursue it. As I packed, it called, siren-like, and sleep overtook me far later than usual.

Squeeze 3: The alarm. It blasted at 3:30 a.m. Bleary eyed at the airport, I waved to my husband, but the stubborn WIP on my desk beckoned.

Squeeze 4: The airplane. The aisle had grown narrower, the rows more cramped. The angle of the reclining seat in front of me had become more pronounced, the arm rests more restrictive.

Squeeze 5: The sun. I wanted to watch the sunrise, but a haze of fingerprints blurred the view. Had anyone ever cleaned the windows? Even still, the brightness stung. Down went the shade. No sunrise. No photo.

Squeeze 6: The arrival. What was the name of that hotel? Where would I catch the shuttle? Had I brought enough tip money? And where in the world had I put it?

Squeeze 7: The conference. Shoving aside cobwebs and plastering on a smile, I tried to make sense of the program. What had I signed up for? And where was the room located?

Squeeze 8: The session. Oblivious to the signage outside the door, I wandered into a room where others had gathered. Sat on the second row. And anchored myself with notebook and pen.

Squeeze 9: The speaker. Was it just me, or was the man crooning a lullaby? Zzzz.

A tap on my shoulder. “What’s your name, ma’am?” the volunteer whispers.

She checks her roster. “I’m sorry, but you haven’t registered for this session.”

My eyes narrow, mimicking the ever-constricting band in my middle. “You’re mistaken.”

Volunteer extends a hand. “May I see your schedule?”

She points to the program. “Is it there?”

I flip open the cover and jab my finger. “See? One day. Thursday. I signed up for today.”

“But this is the Early Bird session. Did you sign up for it?”

“I paid for the day. That doesn’t include the Early Bird?”

She shakes her head.

I gather my things. “I’ll go to a different session.”

“No others are offered today.”

Slack-jawed, I stare. “What did I pay for then?”

“Dinner and the general session.”

“But I paid separately for dinner. That means I paid to attend the general session only? For $350?”

I trail her down a floor, along deserted hallways, to the Conference Control Room.

She peaks an eyebrow and explains to the grim officials behind a long table.

Trading glances, responsibility for explaining to me falls to One in Charge.

“Sorry. But the Early Bird session is a separate fee.”

The unfortunate original volunteer disappears out the door.

Irked, I straighten my name tag and ribbons. And hike up my bag containing nothing but a program. “So … Let’s see if I have this straight. I registered for one day. I chose Thursday. And I paid $350. But that gets me one general session. And nothing else?”

They clear their throats . . . glance left and right … and One in Charge smiles. “Check the registration instructions, ma’am.”

Humph. I whip around and spit my response over my shoulder. “Something’s wrong with   your registration instructions. And how you charge.”

When I entered the hotel that day, the content of my heart was undetectable. But the Big Squeeze produced the Big Reveal. Not plain water or Sprite or sweet syrup, but something sour. Sharp. Bitter. And undeniable. Vinegar.

On the return flight, self-reflection rode in the seat beside me. Sweetness and joy, helpfulness and grace, and worshipfulness had surrounded me at the conference. But had I allowed a single drop to permeate my heart?

My attitude the previous day had earned me no heroine’s title, but I returned home with a fresh perspective. Like the characters in my WIP, I can choose from a host of values: humility or pride, tenderness or cruelty, kindness or bitterness, honor or dishonor.

As a real-life sponge, where will I lie down? In a solution so diluted by the world it’s tasteless? In sweetness so intense it nauseates? In vinegar so tart it repels? Or in a solution that’s just right in every way: the image of God?

Where can I find that solution? I can point to flashes of noble values in the world, but they disappear in a blink. I can’t stir up the mixture myself. Only a perfect God knows the perfect recipe. I can find it through prayer. God’s Word. The grace of Jesus Christ. And the companionship of the Holy Spirit.

My return to the drawing board of life—and the one where that WIP awaits—requires that I allow the holiness of God to soak my heart.

So is my story.

Linda Brooks Davis and her husband, long-time members of San Antonio’s Oak Hills Church, delight in their veterinarian son and daughter, and six grandchildren. A Jerry B. Jenkins Operation First Novel and ACFW Carol recipient, Linda has released a series of three novels and three novellas: The Women of Rock Creek. The second series is on its way.