Step one of publishing a novel might seem like a “duh”—write a novel first! You can’t publish something which doesn’t exist. However, you can garner the interest of agents and editors without a completed manuscript, as I did. So, what do I think the first step is? Overcome your fear of failure (or even success). As Wayne Gretsky said, “You miss 100% of the shots you don’t take.”

I have wanted to be a writer since I was six years old. And through my younger years, I did a lot to make that a reality. I won contests. I got an English/journalism degree and worked as a newspaper reporter. I edited a book for a friend who self-published. I created newsletters for various organizations. I wrote five preschool Christmas plays. I wrote and wrote and wrote. But in the end, I just got “too busy” to pursue getting my fiction published. Why? Was I really THAT busy? I don’t think so.

Confession time: I’m afraid of the unknown, and I’m afraid of change. I think in my case, it was fear of succeeding that kept me from pursuing this lifelong dream. I mean, after all, getting a manuscript ready for publication takes a LOT of work. Do I want that? And if it gets published, then they’re going to want another book and another and another. Do I have that many books in me? The whole thing was overwhelming to me. Mind you, I wasn’t thinking any of these thoughts consciously, but now that I’m finally moving in the right direction, I’ve been reflecting on why it took me so long.

When my little ones were still little, I set a goal for my fiction writing. I decided that when I turned forty, I would get serious about my writing. But thirteen years and two grandchildren later, I am just now making it happen. What is that all about? Why did it take that long? FEAR! So here is my advice to you for step one of your publishing journey.

Overcome your fear. Put it behind you and get serious about living out your dream. If you are afraid of success like I was, that’s crazy! Ultimately, we want success, don’t we? Just don’t allow yourself to be overwhelmed. If you constantly look at the big picture, it is easy to feel that way. One of the things that works best for me is to mentally bite things off in little pieces, so I set small goals. For example, my first goal is to set aside writing time every day. Therefore, I get up an hour earlier than I normally would, and I write for that one hour. Then if I have more time throughout the day to write, that’s great. But if not, I have met my daily goal. If you don’t have a full hour, that’s okay. Dedicate what you do have. You will be amazed at how much you can accomplish when you set aside time and dedicate it to your writing.

If you’re afraid of failure, that makes more sense to me. But just like Mr. Gretsky said, the only sure-fire way to guarantee failure is to never try. If you give up, you have already failed. But if you make an attempt and then fail, you can learn from that. The one thing you won’t do is regret not trying. And who knows? You just might be the next J.K. Rowling or Debbie Macomber or Francine Rivers.

The only sure-fire way to guarantee failure is to never try. So overcome your fear, and don’t give up. -Janette Johnson Melson #ACFWBlogs #writetip #critiques #ACFWCommunity Click To Tweet 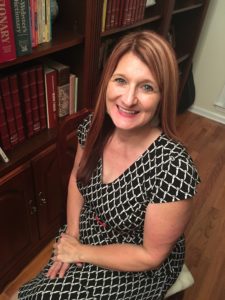 Janette Johnson Melson, the finalist in the 2021 OCW Cascade Contest, lives in Georgia with her husband, Will, and two rescue pups. She is also blessed with two children, both of whom are married or soon will be, and two grand loves. When not writing, she is a piano teacher.