MEMBERSHIP
CONFERENCE
CONTESTS
CHAPTERS
STORYFEST
Home Blog REWRITING: How to Avoid Too Much Introspection in Your Manuscript

Let’s be honest with each other and admit that we all can get introspective at times – stuck in our heads as we ponder either a real-life problem or one our imaginary character is facing in our work-in-progress (WIP).

We mull over options. Debate pros and cons. Maybe we remember a first kiss … or having to say goodbye to someone.

The question is: How much introspection is too much – or when have you been in your character’s head for too long?

When you’re rewriting a manuscript, one thing to look for is scenes that are mostly, if not entirely, made up of your POV character thinking, thinking, thinking. Why? Because thoughts are not action. And readers turn the pages of our books when something is happening – not when the hero or heroine has become self-absorbed.

How do you rewrite an introspective scene? Ask yourself one simple question:

Who can my POV character talk to?

Dialogue is action, so get a conversation going. Figure out how to get someone else in the room with your character. Yes, you may have to change your setting to do this. So often we throw our characters into a car or room and let them think about (react) to an intense conversation or situation, rather than have them talk it out with someone else. If your character is driving, have them activate their Bluetooth (safe driving!) and call their closest friend and talk out what they’re feeling, what they’re dealing with, rather than just mulling over the situation.

Instead of having your character talk to their best friend or their Voice of Truth – the person who tells it like it is – bring the person your character is trying to avoid onto the page. Go ahead and write the scene and let the sparks fly! 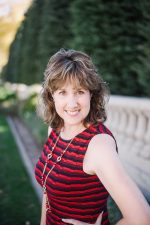 Beth K. Vogt believes God’s best often waits behind the doors marked “Never.” A women’s fiction novelist with Tyndale House Publishers, Beth is a 2016 Christy Award and ACFW Carol Award Winner and a 2015 RITA® finalist. She continued her destination wedding series with You Can’t Hurry Love and Almost Like Being in Love. Visit Beth at bethvogt.com.