You’ve heard the debate: when you write, do you plan first or do you write from the seat of your pants? Until last week I was certain I was a plotter. Once I have the germ of an idea, I draw a story arc, divide the arc into three acts, divide each act into scenes, and list goals for each scene. Of course I’m a plotter. Or am I?

Last week, I gave my first book talk on my first published novel, The Copper Box. I had an hour, including a few minutes for questions. I decided to focus on the age-old question: “Where do writers get their ideas?” True to my plotter nature, I checked on google for the optimum length of time to read aloud to an audience (five minutes). I decide to read three selections of five minutes each. That brought me to fifteen minutes. To leave fifteen minutes for questions, I needed to talk about the central idea in each excerpt for ten minutes.

Remembering the prime directive for all writers—show; don’t tell—I searched for Jerome memorabilia that would show where I got the idea for each passage. I chose a copper box, a glass paperweight filled with tropical fish, and a kaleidoscope. I made an outline of my presentation, including bullet points of what I would say about each excerpt. I practiced, timing with the stopwatch on my phone. I got the presentation to forty-five minutes. I even chose a place to stop early if the audience looked bored, and we all wanted to go home. I was ready.

On the day of the presentation, I entered the room armed with my outline, my book with the passages carefully marked, and my memorabilia. Excerpt #1 was the copper box. I showed the three-inch by six-inch box I found on the internet and read the excerpt. Here’s a snippet.

Across the road a sign welcomed visitors to Jerome Billion Dollar Copper Camp.
Copper for pennies. Copper for boxes. Old mines.
Be careful girls! Someone stepped on Marty’s grave, and she shivered. “I don’t believe in ghosts.”

I explained how I kept the little copper box on my desk for inspiration as I wrote the novel. A woman dressed in a green silk shirt and white pants raised her hand. Little did she know she was about to present me with a dilemma that would challenge my self-image as a writer. “I understand why you chose copper,” she said, “but why a box? Why not a plate or a picture frame or a wind chime?”

I shrugged. “The box popped into Marty’s mind when she was driving into town. She couldn’t remember what happened to her sister, but she knew if she found this box it would solve the mystery.” Oops…even to my own ears that sounded a lot like an answer a pantster would make. And so it went. The same question about each of my show and tell items, the same answer: that’s just what the character thought or said.

That night, I faced facts. Am I a plotter or a pantster? I guess I’m both. I plot first and then I write from the seat of my pants. At least that’s what I thought until this morning. I sat down at the computer with an outline for an entirely different blog on the topic of writer’s block. But as I started to write, last week’s presentation popped into my mind. I wrote Plotter or Pantster? Here I am at the end, without ever writing a single bullet point. Hmm… Am I a plotter or a pantster? Yes! How about you? 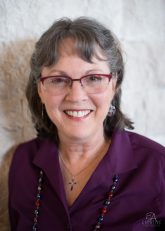 Suzanne Bratcher writes romantic suspense. She won ACFW’s Genesis contest in her genre in 2013. When she’s not chasing characters across the Southwest, she reads, quilts, and plays with her cats, Scamp and Mini Pearl. She lives in central Arkansas. Visit Suzanne on Facebook or her website.