“For the vision is yet for an appointed time. It hastens to the end and will not fail. If it should be slow in coming, wait for it, for it will surely come—it will not delay.” Habakkuk 2:3, TLV

Do you remember your first manuscript rejection? (I know, what a jolly way to begin a blog.) That first “no” felt personal, didn’t it? Mine sure did. Of course, my story and characters were terribly underdeveloped.

Later, after years of classes and critiques and editing, I was confident the time had come! A line of interested agents and editors would fight over me and my story(ies). Yes!

The reality? Editors thought the story was good. The characters were good. But, not for them.

Getting that rejection letter isn’t fun, but, is being passed over always a bad thing?

A Different Pass Over. When today’s sun sets, the first night of the Biblical feasts of Passover and Feast of Unleavened Bread begin. (Exodus 12; Leviticus 23:4-8; Matthew 26; Mark 14; well you get the idea) Our household has celebrated this holiday for nearly twenty-five years.

The symbolisms of the stories and elements are ripe with meaning. God’s deliverance of the Children of Israel—our deliverance. The unblemished lamb sacrificed so that God would “pass over” the Jewish people’s homes—Jesus’ sacrifice so God could “pass over” our sins. So many relevant imageries for meditation.

Who knew there were allegories for the writer’s life?

God’s Timing. After nearly 430 years of bitter bondage in Egypt, the Children of Israel were about to be delivered. Before God would deliver them, He commanded that each family perform a ceremony. An unblemished lamb was to be sacrificed, its blood painted on the doorposts and lintel. Then, a simple meal of lamb, unleavened bread, and bitter herbs with the family. Unless the Jewish people followed God’s command, their first-born would die. (And we complain about social distancing.)

Over the years, wise mentors and friends have encouraged me with the adage, “Being published is in God’s timing.”

Honestly, true though that saying may be, it seemed like there was more at work than “timing.”

An “aha” moment whacked me in the noggin recently. Before the Children of Israel could be delivered—before they could walk out that door—there was a sacrifice.

The Sacrifice. Recently, during my years of exile from the pursuit of publishing, God revealed something unnerving. He said I had corrupted the vision He had given me. I had tainted it with impatience, pride, and stubbornness. Even worse, I had narrowed His vision, and become unyielding. Ouch.

I had a choice: remain in exile with my “principles” or be freed to the Promised Land of God’s infinite creativity. However, it would come at a cost—a sacrifice of my vision. Really, once I knew what I’d done there was no choice.

Unleavened “bland.” At first, writing without the security of my flawed understanding seemed “bland” like eating plain unleavened bread—matzah. The stories and characters seemed flavorless.

Eventually, like the wonderful matzah recipes I’ve discovered over the years, new stories have emerged along with characters I love. Today, the passion for writing is stronger than ever.

How many times have we been passed over? Published or pre-published, has His vision in us narrowed, or been corrupted? Are we in “Egypt” bound to old understanding? Is there a sacrifice God might want from us, so that we can discover the Promised Land of His infinite creativity?

Yes? Then, may your journey be blessed. 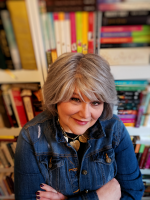