When you think of Jesus’ last night with His disciples, what symbols come to mind? Bread. Wine. Feet being washed. Songs being sung while walking to a secluded garden. 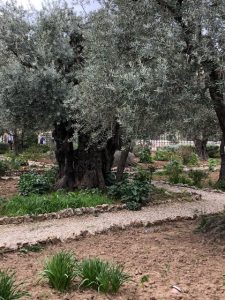 I’d always imagined Gethsemane as a quiet, peaceful spot for relaxation, but our recent travel to Israel made me wonder if Jesus thought of it as more of a symbolic destination.

What’s In a Name?

Biblical names are rife with meaning, and according to our fabulous Israeli tour guide, Gethsemane is actually two words smooshed together: 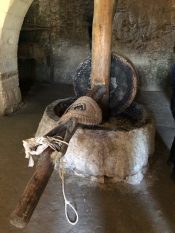 The picture to the left shows an ancient olive press that would have been waiting for Jesus and the disciples when they arrived in the Garden of “Olive Presses.”

The round, stone wheel rolls around the trough, crushing the olives. Oil drains from the trough through a hole into a container on the floor. This is the “extra-virgin” olive oil—but there’s more oil in the pulp that must be squeezed out!

See the flat basket on long, wooden handle attached to the wheel? A worker would fill baskets like that with olive pulp and taken it to the olive-oil press to extract every drop of precious oil.

Several baskets of pulp would be placed between two logs, then—using ropes and pulleys to press down the heavy stones—they squeezed the last drops of oil from the pulp-filled baskets.

So why did Jesus go to this deserted olive-oil production garden after the Passover meal with His disciples? Thirteen grown men needed a place to sleep. The inns were expensive and crowded with Passover pilgrims. The olive grove would have been deserted because Passover meant no work for seven days (Ex. 12:16).

But Jesus didn’t take His friends there to sleep.

“Then Jesus went with his disciples to a place called Gethsemane…He took Peter and the two sons of Zebedee along with him, and…said to them, ‘My soul is overwhelmed with sorrow to the point of death. Stay here and keep watch with me.’” Matthew 26:36-38

What if Jesus chose to pray in the Garden of the Olive Press as a lasting symbol of the inward pressure that squeezed drops of blood from His pores? It’s a powerful image, isn’t it?

Simile vs. Metaphors vs. Symbols

Though a metaphor and symbol are related, a metaphor is generally used to draw a comparison between two distinct objects, whereas a symbol is a stand-in for a more complex and more abstract idea[i]. A simile simply adds “like” to the mix.

Simile: Jesus’ prayers squeezed His heart like an olive press.

Metaphor: Dread was an olive press, squeezing blood from the Savior’s brow.

Symbol: Jesus halted three steps before he reached the olive-oil press and studied the dried pulp in the basket. “Abba,” He whispered to God alone, “must I give every drop of my blood?”

More than a sentence, a symbol is scattered throughout the book. Foreshadowing. Benign mentions here and there. Until the moment of impact—in your mirror moment or climax—when the reader sees its powerful connection to your character’s emotion.

I oftentimes don’t even know what my symbol will be until I’ve written half the book. Make it a bird, animal, jewelry, flower—but whatever you choose, make sure it has deep meaning, heightens the emotion, and comes with lots of fascinating research!

A literary symbol should be scattered throughout the book with benign references until the reader sees its powerful emotional connection during the mirror moment or climax. @MesuAndrews #ACFWBlogs #writetips Click To Tweet 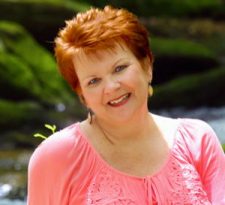 Mesu Andrews is the Christy Award-winning, best-selling author of Isaiah’s Daughter, and has received numerous accolades for her newest release, Isaiah’s Legacy. Through her deep understanding of and love for God’s Word, the biblical world comes alive for readers. Mesu lives with her family in the beautiful mountains of North Carolina.