My novel Over the Waters is set in Haiti. That book also won several awards, so it might surprise you to learn that I’ve never set foot in either Colombia or Haiti.

Research is not my favorite part of writing to begin with, but when you are writing about a country you’ve never visited, let alone lived in, the challenge is daunting! But it can be done and done well. Of course, it’s always best if you can travel to the location and research your setting in person. That was certainly my intent when I planned my novels with foreign settings. But finances and circumstances dictated otherwise.

We became dear friends with a 94-year-old woman from our church. Linda was a retired missionary to Bogota, and had served her entire adult life as a midwife and as a nurse to the lepers of Colombia. Her stories inspired my novel about a young missionary doctor and his wife who travel to a far-off (fictional) South American village. The husband travels to a neighboring village to help during an epidemic, and reportedly dies there. His grieving wife returns home, having discovered she is pregnant, and attempts to put her life back together. She remarries and is happily pregnant with her second child when she receives word that her first husband has been found alive. The dilemma is one that happened more than once in historic wartime situations. I wanted to find a way to bring that dilemma into a contemporary story. It seemed to capture the hearts of many readers, as did After the Rains, and I will soon be writing a third book to complete the trilogy–more than fifteen years after it first began.

But how was I able to research those stories set in places totally unfamiliar to me? My elderly missionary friend, and another woman my age who had lived in Colombia as a young girl while her father worked in the oil industry, were invaluable resources to me as I researched not just my plot and characters, but every nuance of the setting. I was even able to invent a dialect for my native villagers based on a mix of Spanish, Portuguese, and Swahili.

But knowing how difficult that research had been, when it came time to write my novel set in Haiti, I planned a research trip there with my parents, my husband, and our youngest daughter. My parents’ short-term mission work in a girls’ home near Port au Prince was the inspiration for that novel. However, a few days before we were to depart, there was a coup on the presidential palace and our flights were cancelled. We rescheduled the trip, but again, unrest in that volatile country cancelled our flights.

I was desperate, with my deadline bearing down on me. Then, almost miraculously, the Lord began to place people in my life who had spent time in Haiti and could answer my questions, read my manuscript, translate snippets of dialogue into Creole, tell me about the sounds and smells, foods and customs that I wasn’t able to experience for myself. Of course, my parents had served on the board of Haiti Love & Faith for over twenty-five years, and had traveled there each winter to serve, so they were an invaluable first-hand resource.

A writer friend sent me hours of video she and her husband had shot while on a mission trip to Haiti. My childhood doctor who often traveled to Port au Prince with my parents was also a wonderful resource. I’m not exaggerating when I say that I simply could not have written these books set in foreign places without the people who shared so willingly. And I give God the glory when readers or reviewers say, “It’s obvious that the author knows her setting intimately.”

I’m currently writing a novel set in Kentucky. Yes, I’ve visited there before, but it’s not the same as really knowing a place. Still, the lessons I learned writing truly foreign settings are serving me well–and I’m having a blast “living” in a new and exciting locale! 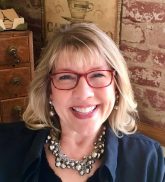 Deborah Raney’s first novel, A Vow to Cherish, inspired the World Wide Pictures film of the same title and launched Deb’s writing career. Twenty years and thirty-plus books later, she’s still writing. Her newest book, the fifth and final in the Chicory Inn Novels series releases this month. Deborah and her husband traded small-town life in Kansas–the setting of many of Deb’s novels–for life in the city of Wichita. They love traveling to visit four grown children and seven grandchildren who all live much too far away. Visit Deb on the Web at www.deborahraney.com.