I get a lot of emails and messages from teen writers asking for writing tips. The two questions I get asked most frequently: “Where do you get your ideas?” and “What do you do when you get stuck?”

Since many of my novels are fairy tale retellings, I start out checking into the original fairy tale and its more popular retellings, but my stories tend to deviate “quite a ways” from the original fairy tale. Stephen King has said, “Good story ideas seem to come quite literally from nowhere, sailing at you right out of the empty sky.” And while that is true, there are also some more deliberate ways to get ideas.

First is to let your thoughts wander. When I start to feel stuck, I roll the story over in my mind and ask myself some questions. “What needs to happen before the big climax?” “How does my protagonist need to grow?” “What would he logically do to get what he wants?” “How will my villain try to stop my protagonist?” And as a romance writer, “What is the most romantic thing that could happen next?”

If this doesn’t work, I’ll find some poor unsuspecting family member and start telling them my story. Sometimes while talking about the story, the next big scene will suddenly come to me. Talking it out can be a great way to remind you of your protagonist’s fears that could be further explored, such as my hero Steffan’s claustrophobia in my upcoming book, The Noble Servant, or heroine Magdalen’s fear that she’ll end up back at home living with her abusive mother after being rejected by the man she was supposed to marry.

In addition to reminding yourself of your protagonists’ fears, you can also remind yourself of their goals and motivations and think of ways that those might conflict. For example, in The Huntress of Thornbeck Forest, the heroine was poaching deer to feed the poor, and the hero was trying to catch the poacher so he would not lose his job. With this at the forefront, I could come up with scenes and events that would show that conflict of interest and create complicated situations–and complicated feelings in my protags.

Another way to get ideas is to watch a movie. For instance, when I was watching the miniseries Young Victoria I was inspired by the scene where Prince Albert gets shot by a would-be assassin who was trying to kill the queen. I love to have one or both of my protagonists make a grand sacrifice for the other, so I thought, what better sacrifice than to have the hero in The Fairest Beauty jump in front of an arrow that was meant for the heroine?

And a final way to get ideas is from research. This is actually my favorite way of getting plot ideas. When I was writing and doing research for my first published novel, The Healer’s Apprentice, I came across an article about medieval law. It said that if an unmarried man was convicted of a crime and sentenced to be executed, he could go free if a woman volunteered to marry him.

I thought, Wow, what a cool scene that would be! I’ll save that for a later book. But I quickly changed that thought to, I’m not saving anything. I’m using it in this book!

Which is another lesson: Put all you’ve got into every single book. Hold back nothing.

And it works even if you’re not writing a historical. Contemporary stories need research too. Don’t be surprised if you get some great ideas when you’re doing research. 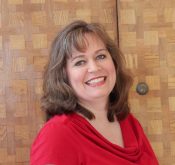 Melanie Dickerson is a New York Times bestselling and Carol Award-winning author. Her latest YA fairy tale retelling, The Noble Servant, is set in Medieval Germany and releases May 9th, and her latest Regency romance is A Viscount’s Proposal. She lives with her husband and two daughters in Huntsville, Alabama.