When I was in the sixth grade, I entered an essay contest at school. The theme was What I want to be.

I considered the topic for days and tossed around ideas about what to write. For the first time in my life, I asked myself the question, “What do I want to be when I grow up?” Sadly, I couldn’t think of a single thing that interested me.

I discussed the essay dilemma with my oldest sister, Kathy. She liked to write poetry so I hoped she could give me some direction. She threw out a few career ideas and suggested I might want to be a nurse or possibly a secretary when I grew up and I could write my essay about that. I scrunched up my nose because those ideas didn’t really appeal to me.

She then gave me some advice I’ll never forget. She said, “You can write about whatever you want to be when you grow up but if you want to win the essay contest, you should say that you want to help people.” Help people?

It was the first time in my life someone suggested that instead of telling the truth, I should give them what they want to hear.

So, having no other ideas about what to write for my essay, I took her advice. I wrote about becoming a special education teacher when I grew up, which I had no intention of doing, just so I’d have a better chance of winning the hearts of the judges.

It worked. I won first place.

The night of the awards, I read my essay in front of the PTA and my classmates. Then I posed with other winners for a photo to be published in the local newspaper. I smiled for the group picture but inside I was disappointed with myself. Everyone thought I’d written the truth in my essay about becoming a special education teacher but my essay was fiction. At the tender age of eleven, I felt like a fraud.

When I finally grew up, I ended up working in Accounting but my true passion is writing. Over the years, I’ve continued to write. I’ve written several children’s stories and self-published a Christmas novella called The Funky Chicken. Looking back, I should have written the essay about becoming a writer. But life can never be that simple.

It’s ironic that what I thought was a bad thing in the sixth grade turns out to be a good thing. I felt terrible for taking my sister’s advice and writing to win the hearts of the judges. But now that I’ve delved into more serious writing and contests, I’ve realized that writing for the judges is exactly what’s needed. Not necessarily because I want to win the contest but because I want to win the hearts of readers. And judges are readers.

Writing the truth will always be important to me even if I’m writing fiction. But now I see it in a different way. I’ll always weave God’s truths through my stories. That’s where I find my greatest satisfaction in writing.

These days when I’m struggling with what to write, I know where to seek direction. I go straight to the source and listen to my Father. 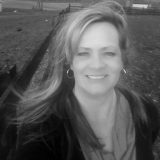 Melinda Eye Cooper grew up in the Missouri Ozarks but moved to Tennessee in 1992 with her husband. They have three boys, a daughter-in-law, and a grand-daughter. She’s a member of ACFW and Word Weavers. Melinda enjoys making desserts for her husband, long walks and spending time with her family.  Visit her on her blog at Melindaeyecooper.blogspot.com.