Today is the seventieth-eighth anniversary of the attack on Pearl Harbor. Have you seen the Midway Movie yet? I can’t think of a more fitting way to commemorate the day. The movie delivers a pulse-pounding re-creation of the attack on Pearl Harbor of December 7, 1941, then follows the major events of World War Two’s Pacific Theater through the Battle of Midway seven months later. 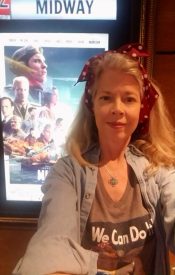 Me in my Rosie the Riveter T-shirt, on the Midway Movie’s opening day. I was excited!

My particular passion is the Doolittle Raid of April 18, 1942, the real-world event that inspired the debut novel I spent seven years writing. I knew from the trailers that the Midway movie would recreate some of the same events my novel The Plum Blooms in Winter covers. I was dying to see what the movie’s reported $75 million budget would do for the story!

The day the movie released, I rushed to the theater for a matinee. I was not disappointed. The scene where Jimmy Doolittle’s B-25 bomber launches from the deck of U.S.S. Hornet—a feat everyone hoped could be done, but which had never been attempted before that moment—was magical. The bomber plunges off the carrier’s nose and disappears while all observers catch their breath, awaiting certain disaster. Then it rises into view, safely in flight in a cloud of spray.

The Doolittle Raid adventure wasn’t the focus of the movie. The movie narrative leaves the Raiders on the run in enemy-occupied China—exactly where my story begins. I literally walked away thinking, Hollywood just released a $75 million dollar prequel to my novel! How cool is that? 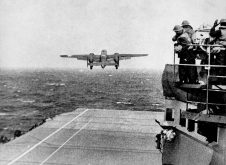 A B-25 leaves the deck of U.S.S. Hornet. The Midway Movie dramatically captures this moment.

So why was I in tears at the end?

The movie does an excellent job of depicting the crazy risks taken by ordinary people who rose to an extraordinary situation. Midway has been described by historians as “the single most decisive aerial attack in naval history” and “the turning point in the Pacific war.” Without people like Lieutenant Richard Best and Major Verne McClusky who were willing to lay everything they had on the line, the outcome of that battle could easily have been different.

Some three thousand three hundred men on both sides gave their lives in that battle. Real people, real heroism. And the movie dramatically illustrates the real cost of freedom.

But there was another dimension the movie doesn’t portray as well. Naval Aviation News put forth this comment. “American scholars of Midway have long sought to explain the many seeming coincidences by characterizing the result of the battle as little short of a ‘miracle.’… One battle participant’s memoir, God Was at Midway, even saw divine intervention at work.”

Gordon Prange’s seminal history book on the battle takes a little different stance. “The results were such a narrow squeak that we believe [our book’s] title Miracle at Midway is…exactly factual.” In other words, the Ph.D. historians who worked with Dr. Prange to prepare his book literally ascribed the battle’s outcome to Divine providence.

That’s not the story Hollywood is going to spend $75 million to tell. But our God, alive and well and hands-on with the major events of our day, is exactly the story I feel called to tell through my novels.

I’ve heard from Christians who feel adamant that any kind of fiction is a dubious pursuit for other Christians. To me, that’s a bit like saying Michelangelo’s Pietà doesn’t glorify God because it isn’t strictly representational. 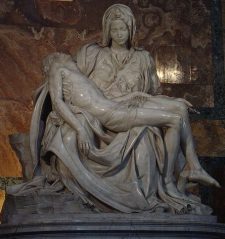 Michelangelo’s Pietà isn’t strictly representational. Mary is much too young, and there’s no Scriptural record she held her crucified Son in her arms. But this work of art has moved generations to ponder some deep truths of the Gospel.

Our culture is an enormous consumer of story. Video games, movies, television, print media. Digital streams to theaters and restaurants and homes and even the palms of our hands. The challenge isn’t with the relatively small audience that favors fiction with Biblical values. The battle is to find a way to speak to the massive audience that digests stories of every other kind.

Who are we to tell the infinite Creator God that He can’t use Christian creatives as a channel to speak into that craving for story?

Our God, alive and well and hands-on with the major events of our day, is exactly the story I feel called to tell through my novels. @lthompsonbooks #ACFWBlogs #writing Click To Tweet 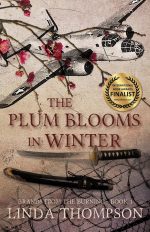