I’ve written a lot about dialog over the years but it’s a topic worth repeating. Dialog. Is. Key.

Talking is how we learn about people. The words they use, the tone of his or her voice, as well as interpreting someone’s body language, is how we form our opinion of people.

As authors, we have to resist the tendency to speak for our characters. Even in “deep point of view” where the reader is in the skin of the character, we have to let them do the talking.

Here’s an example. I’m in fast, first draft mode for my next book and my heroine described herself in prose.

“She was reserved, quiet, self deprecating.”

As I was writing, I knew the line was wrong. Had that little hitch, you know, where you want to hit the backspace key.

But in fast draft mode, the goal is to keep going forward, discovering the story and not pausing to rewrite or edit. Nevertheless, I called my writing partner Susie May and read her the line. “This is telling, isn’t it? I should put this in dialog.”

Luckily for me, there was another character on the page, so I entered into dialog with her from my heroine’s point of view.

Here’s the snippet. Lexa is talking with her driven, selfish, arrogant and rather emotionally detached boss, Zane.

“Maybe we could make one of those pacts,” he said.

“Like if we’re fifty and no one wants us?” What a depressing thought.

“I’m only thirty, Zane. You’ll be forty in two years.”

“Please, Zane, you could never settle for a girl like me. I’m, I’m, I don’t know… the one who likes to hide in corners and stay in all weekend watching old movies or reruns of Frasier. I was the unpopular in school. Somewhere beneath this skin-tight gown is a fat chick.”

See where I’m going? Instead of telling the reader, I showed them. Dialog is the essence of Show vs. Tell. Dialog also allows the reader to make his or her own assumption about the people on the page.

One of the beauties of story is it allows the reader to insert herself into the lines and relate to the characters in her own emotionally unique way.

Tell the story between the quotes.

I was in writers meeting one time as one of the members read a chapter out loud for us to praise and critique. I noticed that the best lines and descriptions were outside the quotes.

“How are you?” Brad was another one of the doctors at the hospital.

Yet outside the quotes were great lines.

That nurse at the hospital he was crushing on finally talked to him. He hoped she be at this party tonight.

When it came to my turn for input, I suggested it would be more fun if the men talked about Brad’s love interest.

“Jane finally talked to me. Said she’s coming tonight. Is she here yet?”

“Dude, you have the hots for Jane? You know she never dates the doctors.”

See, because Brad spoke to Jack about his interest in Jane, the conversation went to a new level. We see Brad has an naysayer in Jack’s goal.

When we tell the story between the quotes, things are said and decisions are made that impact the story. Often we learn things we never knew about our characters.

In Softly and Tenderly, Book Two of the Songbird Novels I wrote with Sara Evans, one of the characters, June, was married to a perpetual adulterer. She’d finally had enough and left him.

When her husband, Rebel, went to woo her back, she confronted him. Oh, it was a good, tense scene. For about ten lines. Then . . .

I felt like I was writing in circles. She asked him why he cheated. He said it just got easier and easier. But in truth, he loved his wife.

June pressed him again and he’d answer the same way, “It was easy.”

My original goal was to show how sin traps people in ways they never anticipated.

And it wasn’t working. Something was missing. I finally talked to the rapscallion cheater myself.

He shouted, “Because she stole my son.”

GASP! What? The bomb he just dropped blew my story wide open and I followed the shrapnel. I developed a new, until then unknown, story line.

June cheated first and for thirty years, Rebel was never sure if their only son was his. But he always treated him like a true-blue son. That little tidbit deepened the story and gave Rebel a redeeming quality.

Think about the parts in books you skim. It’s the prose, isn’t it? Dialog is what connects us to the characters.

Granted, there are moments when we give the reader a break and use prose to describe a scene or setting. Even let the reader in a little secret.

But over all, let dialog do your heavy lifting and “tell the story between the quotes.” 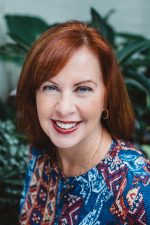 bestselling author. Her book The Wedding Dress was named Inspirational Novel of the Year by Romantic Times Book Reviews. She is a double RITA finalist, and a Christy and Carol Award Winner. Her book, Once Upon A Prince, first in the Royal Wedding Series, was filmed for an Original Hallmark movie and aired in April 2018. A member of the Executive Board for American Christian Fiction Writers, she teaches workshops and leads worship at the annual conference. At home, she’s a wife, writer, worship leader and works out at a local gym semi-enthusiastically. She lives in sunny central Florida with her husband and ornery cat.