I write this post on March 14, and, here in south central Pennsylvania, we have a blizzard. One of my critique partners suggested this storm is my fault because last week I put the finishing touches on a novella where the bleak moments take place during a blizzard. Perhaps I should go outside and act out parts of my final scenes to insure they are realistic.

This writing journey can be rather like a blizzard. There’s the pre-storm sunshine when it is hard to believe the forecasters know what they are doing. Writing is a joy and creating a story world is fun because our characters do everything we expect them to do. To those in the pre-storm bliss, I say brace yourselves, the forecast is accurate. Characters get blown around in the winds of conflict. Plots are slowed by unplanned scenes. And, every now and then the whole story gets stuck in a ‘drift.’

In 2003 I stepped into a new and different world. Maybe all of the people who told me I should write a book had a point. I started writing. I even entered the first chapter into what was then called, The Noble Theme Contest. My score was abysmal, but I persisted. Things like point of view, head hopping, author intrusion, weasel words and ‘show don’t tell’ were foreign to me.

In August of the same year I took my ‘baby’ with me to my first conference, the Greater Philadelphia Christian Writer’s Conference. I’m not saying I thought it was a gift to the world, but I did consider it complete and ready for publishing. I walked straight into the blizzard.

Are you peacefully creating your story and ignoring the forecast? Good for you, keep on writing. Or, maybe the wind is blowing and the cold tempts you to snuggle under a blanket and wait the storm out. You might even be stuck waist deep in a drift of messy plot, too much telling, and head hopping. And you don’t have a shovel.

Take heart. Blizzards end. The sky clears and is brilliant azure again. The sun shines across the world covered in snow as if God spread glitter all over the yard. You might even be lucky enough to have an almost full moon cast silvery moon shadows at night.

No matter where you are on this writing journey, the Creator is with you. Always remember the One who created you is the One who gives you the stories. He is also the One who knows perfectly where He wants your story to go. If you remember to write with Him, you will brave the blizzard in expectation of the beauty. 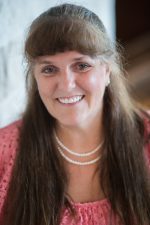 Chandra Smith, a 2015 Genesis winner, writes contemporary fiction filled with inspiration, intrigue, romance, and dogs. Her debut novel, The Light Holding Her, will be included in The Tiny House Collection of novellas scheduled for release in May, 2017. She is a Certified Professional Dog Trainer, lives in South Central Pennsylvania with her husband and dogs. She and her husband are the proud parents of four sons and joyous grandparents to the most beautiful granddaughter in the world.