What author doesn’t want their book made into a movie? 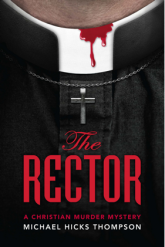 His agent received the manuscript and took it with him on a flight from NYC to Los Angeles. By the time he landed in L.A., he had decided to not only represent Grisham, but also get a movie made. He reasoned it would be the first modern legal thriller. The rest is history.

But, how can the hundreds of thousands of authors get their book on the big screen? I have some thoughts on the matter.

In my case, it’s happening now. I’ve signed a contract with a Hollywood independent film company known for producing Christian movies. After reading my Christian murder mysteries, their team decided to go with the first one, The Rector.

How’d it happen? The same way you can make it happen. There are several Christian independent film companies in America looking for good stories that’ll make a good movie. For this large, eager Christian audience, there’s simply a dearth of good movies.

So, how do you go about it?

First, write a book as if you’re seeing it on the big screen. Be a theater goer and critique your own writing. Suffice to say, you can’t afford to have a sagging middle. From beginning to end, your story needs to resonate with readers and viewers.

It can be a true story, it can be fiction. But it must entertain, first and foremost.

Secondly, ask professional critics if they believe it would make a good movie. You need honest critiques. No sense spending your time with number three below unless you’re absolutely certain it’d make a movey-making movie.

Thirdly, make your presence known to the film companies. Most independents aren’t even located in ‘Hollywood.’ Most are spread out over the U.S. You’ll need to search and research them.

Work your way into their inner circle. There are several strategies for this. I mention only three.

One. Find someone who knows one of the execs. Ask your contact to set up a brief meeting. Lunch is a good time. Take your book. Ask them to read it. Ask them to let you know if it would make a good movie. For sure, they’ll turn it over to some young interns or paid readers, but that’s all you can hope for at this point. Follow up three months later.

Two. If you have an agent intimately involved in the film industry (there aren’t many of them), you can press them to get your book in front of the right people. This is normally reserved for ‘celebrity’ authors. But if your book is movie worthy, go for it.

Three. Drive—fly—whatever it takes to get to the film company’s offices. Sit in the lobby until the CEO is willing to give you 15 minutes. This may be old school, but it might work.

There’s no sense in mailing them a copy. It’ll be trashed. (I know, I tried.) And I can’t blame them. We’ve become such a litigious society, ready to sue anybody at the drop of a hat.

A positive review in Publisher’s Weekly could help.

‘Course, we all know there’s a lot of pie in the sky money when it comes to movie-making. For every film like “The War Room,” which was made for a reportedly $3,000,000 but produced $80,000,000 in revenue, there are dozens that return little to nothing.

Still, the market is hungry and theaters aren’t the only revenue source. Several layers of distribution exist that can provide more revenue/profits than the theaters alone.

A good story is worth the shot. So, if you have the book, and the chops, buckle up and try to get it on the big screen!

Yet, we all know it’s not just our hard work that gets things done. If God wills it, it’ll be done. My film contract could fall apart for many reasons. Lots of bridges to cross. But, in the end, God’s will is always done. And I’m fine with that.

Born in his mother’s bed and raised on a small Mississippi farm, Michael Hicks Thompson knows a thing or two about strong Christian women, alcoholic men, and Jesus. His fictional writings intersperse his observations of human nature with theology.  His latest novel, The Actress (his sixth novel), is available in book stores and on Amazon in print, and for Kindle. Having already won four major awards, The Rector was first in the series. Both novels are murder mysteries that take place in the Mississippi Delta.  He and his wife of 45 years live in Memphis, TN, have three sons and four grandchildren. The little ones call him “Big Mike.”