Ever heard that one before? I can’t remember where I heard it first, but it’s so very true. You can be in the car, behind the wheel, motor running, ready to go. You may even have the brute strength to force the steering wheel to make the tires twist on the pavement.

But the car? It hasn’t moved, and it’s not going to until you put that baby in drive.

You know where I’m going with this, don’t you?

If one of your resolutions is “write more” then you’re going to have to put this writing thing in drive and actually WRITE.

If you’ve been writing and the goal is to land an agent, then you’re going to have to actually query one (or three).

If you’re ready to go to a conference or take a course, then you’re going to have to set aside some money and some time.

God is Sovereign and He can do anything, but as a general rule, when He gives us a dream, a calling, a passion, He expects us to get our rear in gear and do the hard work that comes with following Him.

All that stuff going on in your head? That’s you sitting in the driveway with the car running. Not going anywhere.

You may have gone to bed one night with an idea and awakened with a fully fleshed out plot. You may know your characters better than you know your friends. You may have dreamed up a world to rival Middle Earth.

Guess what? Dreams don’t get published. Documents do.

Your book may have been polished and critiqued until it is a lean, mean, written machine. You think it’s time to send it out into the big bad world, but for some reason, you’re still waiting. You keep thinking it’s possible there’s more you should do to it, so you keep tweaking it.

But what if you’ve done all that? You’ve been writing. You’ve been to conferences. You’ve queried agents. Maybe you’ve had some nibbles, or even some big bites, but as 2020 rolls along, your hands are sweating on the wheel because you have no idea where you’re going.

You want to do to the right thing. Want to make the best of your time. Want to please the One you write for.

Should you revise the story again? Pitch to that other agent? Go to the conference close to home or the one with the focus on your writing? How on earth can you know?

This is where it gets tricky.

What God wants to do with your writing will be unique. So if you’re writing and you’re scared about where you’re going, remember this…

You steer where you stare.

They teach us this when we learn how to drive. You can’t stare at the sides of the road or you’ll mess around and drive off in a ditch. You can, and should, glance around you, but ultimately, you need to keep your eyes to the front.

When it comes to your writing, you need to stop worrying about the others driving around you, quit staring at the steep edge you’re afraid you’ll fall into it, and keep your focus on the One who already knows your ultimate destination.

He hasn’t taken you on this road to leave you stranded in a ditch.

Keep focused on Him. Keep the car in drive. And hang on for the ride! 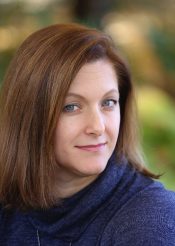 Lynn H. Blackburn writes romantic suspense and her titles have won the Carol Award, the Selah Award, and the Faith, Hope, and Love Reader’s Choice Award. Her newest series, Defend and Protect, kicks off in March 2021 with Unknown Threat. You can connect with Lynn at LynnHBlackburn.com.