library. I devoured The Great Divide, Rare Earth and The Patmos Deception, and Maestro.

Having written four historical Western novels set in early Montana, I felt that I’d been liberated: Violence can exist in Christian novels. Since then AFCW-ers have assured me: Good Christian fiction does not have to shirk the horror of violence.

Violence plagues our world. My genre, the Western, is rife with it. At a writer’s conference, a very successful Western writer told me his books were all about revenge. “We need more revenge.”

My immediate, internal reaction: “NO!”

The stories take place during the Montana Gold Rush of 1863-1866. In that era of the Civil War, Christians and non-Christians alike were forced to make dangerous decisions.

All sorts of people flocked to what is now southwest Montana. Some of them regarded it as their right to take what they could without the strain of crouching for hours in icy streams and breaking rock with sledgehammers to separate country rock from gold. A gang of thieves and armed robbers terrorized those who tried to take their gold home.

In that time and place, ruffians ruled and murder was tolerated.

There was no law. In forming Idaho from four other territories (March 4, 1863), Congress neglected to pass a code of laws to Idaho from any of them. Montana was formed from Idaho fifteen months later, on May 26, 1864.

Until Montana’s own legislature could meet and pass a code of law (December 12, 1864-February 9, 1865), it had no law, no law enforcement, and no courts other than miners courts. Miners courts regulated mining only.

To fill the vacuum of law, men formed a Vigilance Committee that hanged 24 “road agents” during the winter of 1863-1864.

The gold region was not one of unrelieved horror and death. Christians were there, and Christian characters are in my books. Dan Stark, the MC, is Vigilante prosecutor. The woman he loves, Martha McDowell, learns to read from the Bible.

Historically, the first Christians in what became Montana were Iroquois who came with the fur traders in the 1830’s. They convinced the Salish to send a delegation to St. Louis to ask for a priest. In 1842 Father Pierre-Jean DeSmet, S. J., (1801 – 1873) arrived and stayed most of the next 40 years. He worked tirelessly for peace and became a friend of Sitting Bull.

Thomas J. Dimsdale (1832-1867), a consumptive Englishman, raised a congregation of Episcopalians. While a student at Oxford to become an Anglican priest, his family’s money was lost in a bad investment. In Montana Ty., he founded a school, wrote Montana’s first published book (The Vigilantes of Montana), and edited The Montana Post, the Territory’s only newspaper (1864–1867).

William Wesley Van Orsdel (1848-1919) came to Montana Ty. in 1872. A Methodist layman, he felt called to “sing, preach, and encourage people to be good.” His career here spanned nearly fifty years. He built churches and colleges all across the Territory.

Yes, the West was violent. But peacemakers were here, too.

“Blessed are the peacemakers, for they shall be called the children of God.” (Matthew 5:9, NIV)

If these people could spread the Word amid the violence that surrounded them, I’m obligated to write historical fiction without shirking historical reality.

After the Vigilantes destroy the criminal conspiracy that terrorized the roads with a tolerance for murder, they must then build a new territory called Montana. The Vigilante Series by Carol Buchanan. @CarolBuchananMT #ACFWBlogs… Click To Tweet 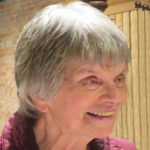 Carol Buchanan is a self-publisher who writes historical Westerns set in Montana when gold, greed, and a vacuum of law led to ruffians’ rule and a tolerance for murder. She’s won awards from the Western Writers of America (Spur and Spur Finalist) and the Whitefish Library Association (Spirit of Dorothy Johnson) for the first four novels in the “Vigilante Series.” She teaches “Becoming Montana” at Flathead Valley Community College and is married to Richard, her “tech support.”