I entered my first Genesis contest in 2002 before it was the Genesis Contest. I think about that pitiful entry now and feel very sorry for the judges who struggled through reading it. The thing is my brave move to enter the contest was the beginning of quite a journey.

In August of 2003, I attended my very first writer’s conference, The Greater Philadelphia Christian Writer’s Conference. I was star struck as I met authors’ whose books I have read. One, in particular, was Angela Hunt. I paid for two critiques by her, because, I was so naïve I thought my first manuscript was complete and ready to publish, so I had already begun its sequel.

Angela was gracious and kind. Before she gave my first manuscript to me, she actually showed me one of her own. I’ll never forget her words, “Before I show you how I marked up your pages, I want you to see what I do to myself.” My star-struckness (can that be a word?) increased when I realized I was looking at her self-editing of one of my favorite books! Then she handed mine to me.

Oh my goodness, talk about “bleeding” on the page. I’m not sure her pen had any red ink in it by the time she finished my thirty pages. I was not disheartened. Angela knew we had a second critique coming the next day, so she handed me the other thirty pages and gave me homework. She suggested I take both submissions back to the hotel, and re-write them using her suggestions and what I had learned in her workshop that morning.

I went back to my hotel that night and by hand re-wrote the first thirty pages of both manuscripts. In our critique session the next day, Angela read both out loud to me.  She marked each of them up almost as much as before, but the improvements were amazing.

Since that first conference I have attended the GPCWC five times and the ACFW Conference six. In 2002 if someone had told my star-struck, naïve, self when I entered the contest it would be 2015 before I would get published, I might have stopped without ever meeting Angela Hunt. I would have given up on the dream instead of following it. And I would have missed one of the greatest adventures of my life.

Don’t ever give up. God gives us writers the amazing privilege to create with Him. He has a purpose for every story He gives. And, my friends, I promise you this journey is worth it. Never get caught up in comparisons and discouragements of how quickly others may have gotten their first book published. Always remember to trust the Creator of the story has a plan and a purpose for it and will be faithful to complete it. (I think I read that in the Bible). 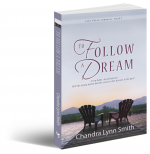 I am writing this blog entry on Thursday, September 19, thrilled knowing that next week at the ACFW Conference I once again have the privilege of sitting under Angela Hunt’s teaching. Even more exciting is I get to present her with her own signed copy of To Follow a Dream, the very manuscript she drained a red ink pen on sixteen years ago. Talk about coming full circle! 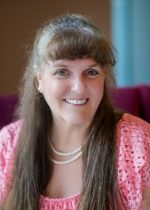 Chandra Lynn Smith is a professional dog trainer by trade and a writer by heart. To Follow a Dream is her third novel.  Chandra, a 2015 American Christian Fiction Writers Genesis Contest winner, and  the owner of Best Friend Dog Training, lives on a small farm in South Central Pennsylvania with her husband  and two dogs. Their house is often filled with the glorious chaos of any combination of four sons,  two fiancés, one daughter-in-law, a precious granddaughter, and nine grand-dogs. Her other novels are Turtle Box Memories, and The Light Holding Her from Coming Home; A Tiny House Collection.