I’m often asked about co-writing because I’ve done it a few times. My first co-written project, Angel Song, was an unusual collaboration orchestrated by agents. While that worked well, it’s not something writers can often control, so I won’t discuss it here.

For my newly released, The Plans We Made, the entire project was conceived, coordinated, and executed by my co-writer, Lauren Beccue, and me. Here are some commonly asked questions:

1) How did you find each other? Bible study. Lauren was my BSF leader. I had 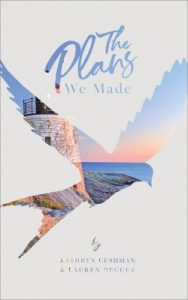 published several novels by then, and Lauren had completed a non-fiction book. We became friends, and began having what we called writer playdates. We would meet in a coffee shop and work side by side on different projects—her non-fiction, mine fiction. Barely ten words were exchanged over the course of the two hour “playdate.”

2) How did you decide to co-write? One morning at Starbucks, Lauren told me a book idea her husband suggested, and I almost fell out of my chair. It was audacious. I immediately said, “You have to write that story.” Months later, she asked if I would be interested in writing it with her. I was neck deep in research for something else, but told her I would pray about it. I did, and here we are.

3) What was the process? We took the original story seed and developed it until it was ready to show our agent, Janet Grant. As I mentioned earlier, the original idea was pretty out-there. Janet resisted a little, and said, “Write a few chapters and a synopsis, but I think you’re going to need some significant modifications.” Janet was correct (as agents often are). We let it stew for a while, then came back together and coordinated plans to tone it down.

5) How did the process work? We used Google Docs, marking each scene with the day of week and the date, as some events in the story were time sensitive. Every so often, we would meet to discuss major plot points. After the first draft, we worked together to get it cleaned up. This is when co-writing is particularly nice—a built-in critique partner who’s fully invested in the story.

6) What is your advice to someone thinking of co-writing?

The process (and result) is worth every bit of the effort. 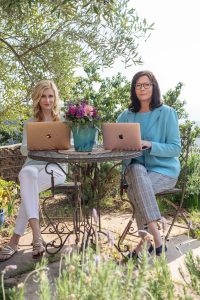 Kathryn (Katie) Cushman and Lauren Beccue both live, write, and drink coffee in Santa Barbara, California. For more about their writing check out www.kathryncushman.com and www.laurenbeccue.com.