So we planned a lazy Sunday afternoon date with Netflix and quiet conversation. He scrolled through our options, interested in a documentary. As titles moved past, I noticed a low-rated show that blew my mind – Wife Swap.

“Who would do that?”

He shrugged and kept scrolling. “I honestly have no idea how anyone could do that.”

We were well past the visual for the show, but my writer brain couldn’t let it go and like an idiot, I started processing out loud. “Maybe they got bored?”

He stopped scrolling immediately and gave me a look. Only several dates in, and I knew I needed to explain my crazy writer brain. Fast. “I’m just trying to get into the head of someone who doesn’t follow Christ who would volunteer to be on that show. Bored was the first motivation that popped into my head.”

Thankfully, he let that swing by, but it reminded me of one crucial rule in writing – we must forsake our perceptions, convictions, motivations, and beliefs in order to get into the head of some of our characters so that we can both paint them in an accurate light in the beginning and chart a relatable journey to the end of the story when they are better than when we found them.

I write best when I push outside my own head and dare to ask the question, “Who would do that?” Then I quickly follow it up with one more pivotal question: “Why?” That understanding and exploration is key to writing characters we love, characters we hate, and characters we come to love.

Understanding this about my character helps me write them with consistency through the journey and also craft their change. I remember an editor recommending my character say or do something in my first book that felt off to me. When I finally identified why it felt off, I realized that what she suggested wasn’t true to the character. I was able to push back, take her idea, and twist it to fit. The result was a blending of her expert editing skills and my intimate knowledge of my heroine. But this was only possible because I dared to dig into a woman who was so opposite me in so many ways. I knew her, and I fought to make her ring true.

A friend of mine encourages me to walk into every conversation with people I meet and see the person sitting across from me as fascinating. What if we looked at our characters that way? Then sit down and just ask them to talk. Dig into their head. Set aside your own personality, interests, and belief system so that you can hear and understand theirs.

Then write. I bet the result is authentic and maybe even fascinating. 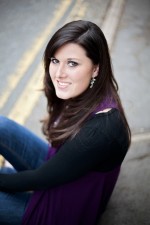 Kariss Lynch writes contemporary romance about characters with big dreams, adventurous hearts, and enduring hope. Surrendered, the final book in her Heart of a Warrior series, released in December 2015. In her free time, she hangs out with her family and friends, explores the great outdoors, and tries not to plot five stories at once. Connect with her at karisslynch.com.