During this season of thanksgiving, we enjoy a feast of turkey, dressing, casseroles, corn, cranberry sauce and croissant rolls. Mashed potatoes with gravy and sweet potatoes complete the display. It’s a time of family gatherings, parades and football games.

While it brings a halt in our writing schedule, it is a prime opportunity to gather fodder for our fiction from the non-fiction happening around us. Think about it. There’s the antics of that one corny uncle who has a little too much sauce before he arrives. We have those whose dressing choices vary from classy to smart casual to pajama wear. We can’t forget great-grandmother with the rolls of her knee-highs worn mid-calf or the adopted cousin who’s in a dark rebellion stage. When you mix in several out of control children you’ve got a premise for a comedy or a sit-com script. Add in the turkeys who always arrive late so they won’t have to help in the kitchen fueling sibling rivalry and you’ve got the makings of a soap opera.

Listening to southern slang amid the idioms of our mixed cultures adds chaos to the event. Relationships ranging from puppy love to married fifty years plus, add spice to the day. Clouds hover above those experiencing heartbreak of love lost. I had one aunt who had been married seven times. You never knew who she would show up with.

When you’ve survived it, the madness of Black Friday looms with its pushing and shoving that brings out the best/worst in all shoppers. Add long lines and freezing temps and you’ve got drama personified.

Several years ago, while at my third stop of the morning, getting frostbite as I waited on a sidewalk for a store to open, I received a text from my husband. He had escaped the mayhem of Black Friday to his deer stand. His text read, “Got a do…missed a buck.” To which I replied, “Spent dough, need bucks!” Our use of homophones was humorous but we understood each other completely.

As Thanksgiving week comes to an end, we launch into the Christmas season and all its hubbub. It’s the circle of life with every emotion we utilize in our prose. It’s our own reality show that can be a wealth of material for our writing if we glean from all aspects of the season.

We should be very thankful this Thanksgiving Day for personal material we can turn into a New York Times best seller. Don’t see it as lost writing time. Recognize the research being dumped at your feet to percolate into paragraphs. It’s real-life adventures at its best! 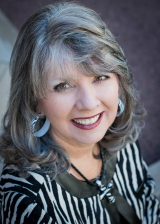 Shirley E. Gould is an inspirational speaker, an African missionary and a freelance journalist. She’s founder of Kenya’s Kids Home for Street Children in Kenya, East Africa. Shirley has written articles and newsletters for twenty years and is presently writing Christian Fiction novels. She lives in the Nashville, Tennessee area.