As Christian fiction writers, we weave our faith into our stories whether we mention God or not. We can’t help it because it is intrinsically part of who we are. And that is a good thing. It means for the non-Christian that our stories are salty and make them thirst for something more than this limited life. For our fellow believers, it means our tales nourish and encourage them to delve deeper into their relationship with the triune God.

But the gospels aren’t just the foundation of our faith. They are good writing that has endured the test of time. Because of that, there are lessons we can learn from their pages and apply to our craft.

Matthew: Focus on your theme and make sure all your details support or allude to it. In this gospel written by a former tax collector to a Jewish audience, the emphasis is on Christ as King, the ruling Messiah. It’s no accident that the visit of the noble wise men is included in Matthew’s account. It demonstrates both that Jesus was worthy of such admiration and immediately sets up a comparison between him and the worldly ruler of the day.

Mark: Every writer who has studied craft for a while has heard the Latin term in media res. It means to start, not at the beginning, but in the middle of the action. In this way, the gospel of Mark can act as the blueprint for every thriller ever written. It begins, not with the birth of Jesus, but with an itinerant preacher at odds with the establishment. Based on Peter’s recollection of events, Mark tells the story filled with conflict and dialog. And rather than end after Jesus ascends, it throws in a cliffhanger to make you want to read the sequel. “They went out… and confirmed the word by the accompanying signs.” Without verses 9-20 (disputed in some texts), this gospel ends with the disciples being afraid of what the angel said. Talk about action!

Luke: Do your research. As the only Gentile gospel writer, Luke had a mission to tell the story to the lost world. Because of this, he wanted to make certain every word was accurate and complete. Rather than rely on hearsay and what he knew, Doctor Luke interviewed everyone he could find who had lived through the event. In fact, the most likely source of his version of the nativity would be Mary. After all, we know from Scripture that she was alive and present at the crucifixion. Who else would know about the presence of Simeon and Anna in the temple or that Mary pondered the events of Jesus’ birth long after they ended?

John: Every theologian will tell you that John is the most unusual of the gospels. Its tone is more mystical and devotes most of its content to the week of the Jesus’ death and resurrection. But one thing that this account has, more than the others, is the development of a strong main character. There is not an event or miracle included that John didn’t purposefully mention to help us get to know Christ better. He knew more, (Jesus did many other things according to John 21:25), but he included just what we needed and no more.

As you start new projects in 2019, think of the lessons from the gospels and support your theme like Matthew, begin with the action and conflict like Mark, do your research as Luke did and include only what develops your strong main character like John.

Because it always pays to imitate good writing! 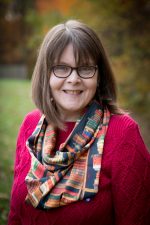 Susan A. J. Lyttek, author of four novels, (fifth due out June 2019 and sixth January 2020) award-winning writer, blogger, wife and mother to two homeschool graduates, writes in time snippets and in colorful notebooks. She also enjoys training up the next generation of writers by coaching 5th to 12th grade homeschool students at her local co-op.