Editing has been much on mind lately, and I’m learning that editing requires more of my time and focus than drafting the original manuscript.

I’m working on the fifth, and final, novel in a five-book series. This one has taken more time to write; I’m aiming for something more ambitious than its four predecessors. I’ve been through the complete draft five separate times and worked on partial segments countless other times. I know I have at least two more complete editing reviews before I turn it over to the official editor and publisher. 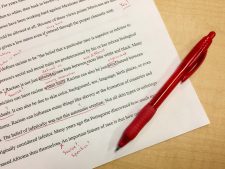 Editing is meticulous, time-consuming work. Writing the first draft can be exhausting and certainly more exhilarating, but editing is often where the real work starts – and seems to never end. It’s not perfectionism. Instead, editing is a complete mental, emotional, and spiritual engagement with the text you’ve created.

As I’ve worked through this manuscript, I realized I’m editing for six reasons.

The first reason is obvious. I edit for accuracy, to correct misspelled words, grammar mistakes, and punctuation errors. I’m amazed at how I can find an obviously misspelled word in the fifth editing round – one missed by both me and automatic spelling checker the previous four times (five, counting the initial draft).

Second, I edit to shorten. Not unlike most authors, I tend to overwrite the first draft. I put too much in, scenes and sometimes even characters that don’t really add to the story. I also write more words than a thought, statement, dialogue, or scene actually needs. This is what might be called ruthless editing, when you take your writing knife and slash.

I edit to clarify. What read well and made perfect sense in the drafting and first editing phases suddenly doesn’t read well at all. I assume the reader must know what I’m thinking, when I haven’t really explained it at all. Each sentence and each paragraph have to be examined closely, and often over several readings.

Fourth, I edit to deepen the story. This is often a battle with editing to shorten. Many times while I’m reading I’ll realize that a scene needs something more, a character needs more depth, or a conflict needs more context. Sometimes I’ll catch something that’s sitting there, waiting to be fully exposed and developed (like a major character in my work-in-progress).

I edit to polish the words and the overall story. I smooth out the rough places. I substitute words and phrases. I simplify complex sentences. Occasionally I remove an entire scene because, even though I like it, it adds nothing to the story. For this fifth manuscript, I deleted four thousand words of a developing relationship because it was a side story immaterial to the main story line.

And sixth, I edit to get the story right. Does it flow from beginning to end? Do all the characters carry the weight they’re supposed to? Is the story credible, and does it sound reasonable and right? Does the conflict carry through to the end, and is it resolved in a way that fits the entire story? I might call this the “macro edit,” and it’s often the most difficult and time-consuming.

I’ve set the manuscript aside for the past three weeks, to give myself a physical break but also to let the draft rest and my mind think through where it all now stands. I don’t know if an author ever thinks of a manuscript as finished, but this one is close.

And now it’s time to get back at it.