I spent an evening a couple weeks ago at a Bible study, discussing John Chapter 2 and the wedding at Cana. The story is a familiar one. Our Lord turned water into wine, and the master of the feast, who didn’t know where the wine had come from, declared it the best he’d tasted at the feast.

That story is packed with powerful truths, but for some reason the words that spoke to me loudest were these:

“Now there were set there six waterpots of stone… Jesus said to them, ‘Fill the waterpots with water.’” (John 2:6-7)

No detail in the Bible is extraneous. So, what were those waterpots doing there?

One of my Bible study buddies had an answer that still rings in my ears. “If you want the Lord to fill you, you have to show up empty.”

Show up empty. Yikes! I tend to show up pretty full. Place stock in my own competence, or failing that, at least in my ability to push through by dint of sheer determination. But as Christian creatives, we endeavor to be God’s instrument in at least a couple of processes that only He can bring about.

It’s so important that I not lose track of where I fit in that process. An intermediary, nothing more, by which God will do what only He can.

Whether you’re a performing artist, a visual artist or a storyteller, there’s a lot of pressure—internal and external—to grasp at the glitter. To focus on the things that glorify you, rather than God, and that you hope will help your work find a bigger audience. 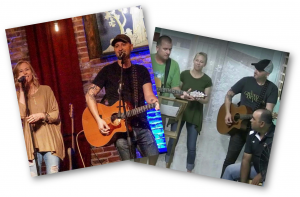 Jeremy and Kaci Neely perform at a U.S. church, and help lead worship at a church in Cuba.

I’d like to introduce you to a couple who’ve had a profound impact on me. My son and I formed a friendship with Nashville musicians Jeremy and Kaci Neely while serving in 2015 at Creation Fest UK, a Christian music / teaching festival in Cornwall. Jeremy and Kaci are a husband / wife singer / songwriter / “musicianary” duo. While I love their music (check out one of my favorite songs), they’ve had their biggest impact on me through their approach to ministry.

Here’s one episode I don’t expect to forget. Standing in the lengthy buffet line for Creation Fest volunteers, Jeremy talked to me about the addictiveness of the spotlight, and how Lucifer had been seduced by his own glory as the worship leader in heaven. When we reached the front of the line, the server noticed Jeremy’s silver “band member” wrist band. “Why are you standing in this line? There’s a special dining area for the bands,” she said.

Jeremy smiled and shook his head. “Thanks, but we’re good.”

Maybe declining a little well-earned preferential treatment wasn’t a huge thing, but the way Jeremy and Kaci lived out their convictions impressed me. That was their first trip overseas to minister, but they’ve since done several more.

I spent my first career doing marketing in corporate America, so unlike many authors I know, I have an itch to get my fingernails dirty marketing my book—it’s in my blood! But it’s critical to maintain the right perspective. At the end of the day, the battle to impact lives through anything we create is a spiritual one. Any credit, and any real and lasting success, belong to the Lord.

If you want the Lord to fill you, you have to show up empty. @lthompsonbooks #ACFWBlogs #writing #Christfic Click To Tweet 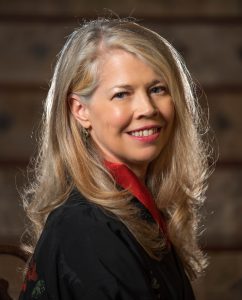 Linda Thompson stepped away from a marketing career that spanned continents to write what she loves: stories of unstoppable faith. Her debut novel, The Plum Blooms in Winter, is a 2019 ACFW Carol Award finalist (Debut) and 2016 Genesis winner. Linda lives outside Phoenix with her husband, a third-generation airline pilot.  Visit her at www.lthompsonbooks.com.