I wrote Mayflower Chronicles: The Tale of Two Cultures as historical fiction so I could create conversations. However, I still wanted it make it as historically accurate as possible. I especially wanted to be faithful to the details of this famous 1620 voyage from the Natives’ perspective. Researching that perspective proved to be much harder than I had imagined. I read books by Native authors and university faculty who teach Native American studies. I followed Native American posts on social media. I visited the National Museum of the American Indian and Plimoth Plantation in Plymouth, MA.

I did google searches. I even hired an under-thirty-someone to help me with the research. 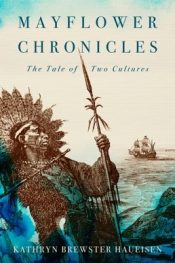 Having grown up with computers, she could track down in a matter of hours what would have taken me days to find. Thanks to her, I eventually had a chance to interview a few historians and people in the Native community who were willing to talk to me.

I was nervous about releasing a book that included the perspective of a culture that is not my own. My goal in writing Mayflower Chronicles was to create a believable story about both the English and Native communities. My extended family includes people whose heritage is part Native American, though not from the New England area. One of them told me he doubted anyone would talk with me because they just don’t trust people of my ethnic background. I understood. None-the-less, I wanted my book to help build a bridge between European-descended people and indigenous people. That was the whole pint of retelling the famous story. I wanted to give voice to those whose voices have traditionally been overlooked.

I did manage to line up a few interviews. I found someone willing to do cultural sensitivity editing. He corrected a few false notions I’d incorporated and helped me rework the story to more realistically describe how Natives in the Massachusetts area would have done things.

Then came an introduction that I can only attribute to the Holy Spirit’s intervention. Through the connections of a writing colleague in Rhode Island, I was introduced to not one, but three people who are direct descendants of Massasoit Ousamequin. Their ancestor was the grand leader of the Native Americans in the New England area at the time the English settlers arrived. In the spring of 1621, he called on them to work out a treaty. These three people agreed to let me interview them. I was worried they might be so offended by what I’d written about their relative that they would urge me not to publish the book. After they read the manuscript, they filled in some gaps in my information and thanked me for making the effort to contact them.

They not only approved of what I’d written, they agreed to write the forward to the book. They also invited me to be a guest at their Tribal Council. We were discussing details about such a visit when we all went into quarantine mode in response to the Coronavirus. We are confident my great x 12 grandfather William Brewster became friends with their ancestor Massasoit Ousamequin. Now, thanks be to God and my determination to include the perspective of the Native people, this family and I are continuing a friendship forged 400 years ago.

Research is a critical part of writing any version of history. I am grateful the research and connections that introduced me to meet this Native family.

Research is a critical part of writing any version of history. @AuthorKHaueisen #ACFWBlogs #writetips #research #ACFWCommunity Click To Tweet

Kathryn Haueisen writes about good people doing great things from her home in Houston, TX. She blogs weekly at https://www.HowWiseThen.com. Her new historical fiction is her sixth book. Her work has been published in numerous national and faith-based publications.