Joshua Graham and I chatted regularly by phone. During our talks, we spoke about faith and how Christianity funneled into our writing. Mine, through the main characters’ belief systems and his, as a fundamental plotting device.

Since then, I have written both ways. For instance, The Deer Effect, which won the category for religious fiction in the 2015 Pacific Book Award, is set between real life scenes and supernatural ones. The main character becomes a stronger believer by the end of the novel. And yet, another novel called, The Lesser Witness, a Christian fiction story, is set in a post-apocalyptic world where the main character is a non-believer in the beginning but becomes a fully-developed believer by the end of the story.

I enjoy writing both Christian and faith-based stories. If you ask why not focus on over the other? I might say, “It’s the spirit guiding my decisions.” I might also say, “I don’t know why.” Which, to me, is another way of saying these decisions are out of my control. I’ve heard people say decisions like this are the subconscious mind working. I like to think that the subconscious mind is where the Holy Spirit resides. There and in my heart.

Christian fiction can deal with faith from the very start. For instance, I’ve seen Christian authors pit a character against a life-altering dilemma. That character is either a believer at the beginning or not. The writer poses situations to test the character’s faith, but she fails at each step until her firm belief is finally revealed and she ends up succeeding by the end of the story.

Writing Christian characters this way offers writers a great tool for exemplifying the main character’s arc. This plotting device is straightforward and obvious?at first, she has no faith then ends up becoming a believer; of course, with a bunch of trouble happening in the middle of the story.

I call these two examples “strict” Christian fiction because character and plotting do not waver shift in standpoint from the character’s arc?to become a Christian or to grow into a stronger Christian.

As the genre suggests, faith-based fiction deals with Christianity more as a character trait and not via a plotting device. Faith-based stories deal with a character’s dilemma as in more of how a character forms decision. Her faith guides her when confronted by problems.

For argument, let’s say that a character must choose one of two things: to make an unethical choice at work and get a promotion, or not to and get demoted or even fired. What would she do? In faith-based stories, her Christian background is the driving force behind her decisions and not plotting. The entire story might deal with this single problem.

EXAMPLE A: Maybe she hems and haws about actually going through with the unethical act for a while before deciding, no, she will instead find new employment.

EXAMPLE B: On the other hand, maybe she does act poorly, then realizes her error, calls out the people pushing her to act in an immoral way and reaps not only the ethical and spiritual effects for atonement but also gets an even better promotion from the one she got acting unethically.

In either example, her faith wins out and she ends up a better person for it by the end of the story.

My latest novel, How the Deer Moon Hungers, scheduled for release July 2020, is what I call faith-based fiction. I love reading writing both types of Christian fiction. I enjoy writing faith-based stories because they give me freedom to stray from the plotting required in strict Christian fiction. As well, writing faith-based fiction gives me freedom to write stories that are not necessarily what people term “sweet” fiction. But that is another topic for another blog post. Until then, keep the faith and keep writing!

“I enjoy writing faith-based stories because they give me freedom to stray from the plotting required in strict Christian fiction.” @susanwingate #ACFWBlogs #amwriting #WritingCommunity #writerslife #Christianfiction Click To Tweet 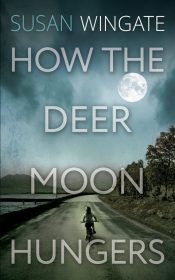 Susan Wingate is a #1 Amazon bestselling award-winning author of over fifteen novels. Her latest novel How the Deer Moon Hungers has been nominated into the 2020 National Book Award. Susan often sets her stories in the Pacific Northwest where she lives with her husband, Bob. Visit Susan on Twitter and Facebook.