Most recently, it was a way I heard my mother use the that left an impact. We were looking through photo albums after her 80th birthday party, and she started reminiscing about her childhood.

My parents grew up poor, especially by today’s standards. As a child, I heard a lot of the same stories my friends heard from their parents: one pair of shoes, outhouses, taking breaks from school to work in the fields. 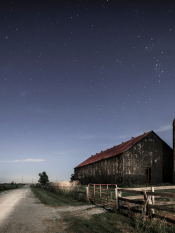 The stories reached some measure of legendary status as my brother, sister, and I would finish them, “and you walked uphill both ways!” They would laugh but, as I’ve become responsible for myself and my family, I’ve marveled at how far they’ve come from their childhoods and wondered if I would have done as well in the same situation. Turns out, it becomes a matter of attitude as reflected by her musing that night. I wrote her words down after we said goodnight because the gentleness with which she said them touched my heart.

She said, “When I was young, and the nights were hot, I would lie with my head at the foot of the bed because it was nearer the window.  Through the window, I would look at the starry sky and the cotton fields and notice how the tin roof of the barn gleamed in the spotlight of the moon.  I could hear the soft lowing of the cows in the pasture and I was happy.  Right now, I can think of those nights and it seems as clear to me as anything I did last week.  We were poor people, but I never felt that I didn’t have enough.”

Her parents had given her the gift of the attitude of contentment. They labored for every bit of food they ate and every material thing they possessed but shared generously with neighbors. They didn’t complain…just did the best they could with what they had. No jealousy. No whining. Like Paul said of himself, they had learned to be content whatever their circumstances, grateful to God for every good thing received.

Contentment seems to be ridiculed in our society. The beauty of it has been lost and it is too often associated with laziness or lack of ambition or imagination, but that’s not what I hear when I hear Mama say ‘enough.’ I hear thankfulness for the simple things: a bed to sleep on, a roof over her head, and a window that allowed the evening breeze to cool her on a sticky summer night.

Contentment seems to be ridiculed in our society. The beauty of it has been lost. @proverbs279 #ACFWBlogs #encouragement #ACFWCommunity Click To Tweet 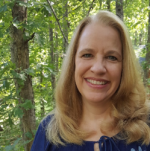 Renee Hodges blogs at www.sweetfriendship.life, has completed her first novel, Ona Mae’s Deli and Bait Shop, and is working on the next novel. For down time, she and her husband enjoy traveling, having friends over, and hanging out in their easy pants watching cop shows and cooking competitions.