Fictional While House speechwriter, Sam Seaborn, sits at his desk writing with feverish intensity. At a point of frustration, he rips the sheet of paper off his tablet, crumples it, and pounds his fists three times on his desk. He chucks the offensive wad into his wastebasket, picks up his pen and starts anew. In a later scene, Toby Ziegler, his supervisor on the popular West Wing series, stands behind Sam and offers help. What was of such major importance they strived so hard to get right? A special speech for the president? A white paper outlining a new administration initiative?

No, he was creating a birthday card. The chief of staff delegated to Sam the mundane task of writing a birthday message for a low-level member of the administration. Sam wanted to “nail” it because his words represented the president’s sentiments, and Sam sought to honor him with what he wrote.

It’s worth a watch because we all recognize ourselves in the scene, and that makes it funny. We try to craft a scene with the exact words to match our characters, our voice, and the overall theme of our story. We start with an idea—an idea which hopefully germinates into a story. The story must carry weight to capture first our imagination as an author and then—then it must capture our readers’ fancy, transporting them along on the journey.

Songwriters—good songwriters—do this well. To get the full lyrics of a song which inspired me, I took a careful listen and transcribed the words in my journal. The exercise included a lot of stops and starts, and in the process, I heard much more of the background music than before. The basic melody is easy to grasp, but as I listened, I heard the foundational layers that give the song its complexity and wholeness. The artist added harmonies, instruments, and progressions to round out the song. It wouldn’t have been the same without all those additions.

That’s what Sam Seaborn attempted, and it’s what we endeavor with each story we write. It takes layers to tell a compelling story. Without the fullness of plot, characters, conflict, setting, and final resolution (where both author and audience expend a grateful sigh), it remains incomplete. All the layers need to present themselves in our stories or we risk losing our readers. Just as musicians add melodies and harmonies to songs to move and inspire the listeners, we, as word lyricists, do the same with our stories.

Think on all the above elements as you write your next story. How can you build the layers which complete the whole picture? What Sam Seaborn tried to do was layer meaning into a simple birthday card (which he re-named a message so it would carry more weight), and Sam’s acts of crumpling and chucking proved a release for his angst when the right picture wouldn’t form. We too, can layer the elements of a good story to entertain and inspire our readers. We however, as Christians, start with a foundational layer—prayer, for we write not for man’s glory, but for God’s.

On the occasions when the precise words and layers escape us, we can’t crumple our laptop, much as we’d like, but we can pound our fists. Just don’t throw your laptop, please. We need your words.

Maybe we should use a pen and paper more often. The crumpled sheets will serve as reminders of the layers needed to complete the tale we’re trying to create.

Just as musicians add melodies and harmonies to songs to move and inspire the listeners, we, as word lyricists, do the same with our stories. @LisaLBaker82 #ACFWBlogs #writetip #ACFWCommunity Click To Tweet 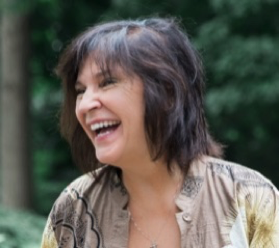 Lisa Loraine Baker and her husband, Stephen, inhabit their home as the “Newlyweds of Minerva” with crazy cat, Lewis. Lisa is an award-winning writer and author of Someplace to Be Somebody (End Game Press – Spring 2022). She has written for Lighthouse Bible studies, CBN.com, and is a contributing writer for Salem Media Group.