One directive probably every writer has heard is “Write what you know.” Ever mull on those words and come up empty? Or feel as if you’re fighting a war? I have.

But when I dig deeper, I invariably recall some gem from the past that usually involves my mother. She was a hoot. No one enjoyed laughing as much as she. When I was a teen, we “butted heads,” but we had a lot of fun too.

But she was fierce too, especially where her children are concerned. What a template for character traits she was. For example, one of Mother’s favorite sayings was “I’ll fight every 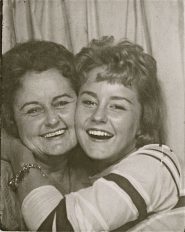 ol’ demon in hell for my kids!”

She lived out those words every day of her life but never more forcefully than one night in 1963. My brother Butch had suffered an all-but-deadly car crash in 1961. He sustained severe injury to his head, was in a coma for a month, and spent another month recuperating and undergoing exams for brain damage. (By God’s grace, the results were good.)

He left the hospital with his jaws wired together and instructions never to get another “blow” to the head. Such a blow could be fatal.

Fast forward to a night in 1963 when Butch as a recent college graduate attended a local high school basketball game with my crippled father and my mother. Because they were a bit late and the “home” side of the gym was full, they sat on the opposing side.

Butch cheered for “our” side in ways only Butch could, and the opposing team’s coach didn’t like it a bit. He kept looking back and frowning, but Butch ignored him.

Suddenly the coach stood and climbed up the bleachers. Butch saw him coming and stood himself. The coach grabbed Butch’s leg and pulled him through the air downward where he fell between the first two rows of bleachers. As he got up to defend himself, the whole place turned into a brawl.

Mother saw one thing and one thing only: her son who wasn’t to get another “blow” on the head, flying through the air and landing with a crash. Furthermore, the brawl had moved to the gym floor where the game had come to a stand-still. One of the referees held onto Butch to keep him from punching out the coach.

Without considering her actions, Mother flew down those bleachers and began beating that referee about the body with her purse and hammering him on the head with her fist.

The man tried to make her understand he was helping her son, not hurting him, but there was no way she was hearing him. She was “fighting’ every ol’ demon in hell for her son.”

Turned out she broke her little finger on that poor man’s skull.

Years later, Mother visited cousins out of town. She needed to get away from some problem brewing at home.

When the cousins got up one morning they saw Mother had packed. “Are you leaving? Sure you’re ready to tackle what’s facing you at home?” they asked.

“Oh, yes.” She held up her right pinkie. “You see this? Wait till you see what I can do with all five!” She spread her fingers wide and headed out toward home.

As writers, we sometimes engage in warfare—particularly with the enemy who wants us to lay down our arms and give up on our calling. In those dark moments, it’s comforting and exhilarating to remember King David’s declaration in Psalm 27:3 NIV: Though an army besiege me, my heart will not fear; though war break out against me, even then I will be confident.

The other day, my husband Al peeked into my office where I was battling my way over a writing hump and said, “Have you used all five fingers yet?”

I chuckled, remembering the “character” who reared me. ”No siree. I’m just getting started!” 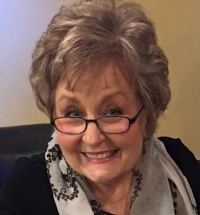 Linda Brooks Davis was born and reared on a farm in Raymondville, a small Rio Grande Valley community in the southernmost tip of Texas. She earned a bachelor’s degree in Speech Pathology from Abilene Christian University and a master’s degree from Houston Baptist University. She retired in 2008 after forty years as a special educator and administrator. Now she writes at home in San Antonio, Texas. Linda and her beloved husband Al worship and minister at Oak Hills Church and dote on six grandchildren. Readers may interact with Linda through her website, www.lindabrooksdavis.com or on Facebook, Twitter, and Instagram.