I usually invite another author to join us when Billy and I work the Blueberry Festival in Nacogdoches, Texas. Having someone to display their covers helps draw readers to our table, but it also gives us someone to talk to during the long periods when nothing is happening. 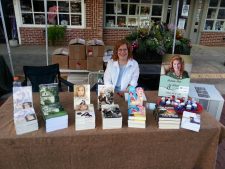 One year, my husband watched carefully as one of our friends sold her series to anxious readers. The individual price of the books was higher than the discounted price when they bought the set. Billy learned something from her sales technique, and from then on, he nagged me to turn Give the Lady a Ride into a series.

Problem is, my first publication—my grace award winner—was intended to be a standalone. I already had two other standalones on my table. I’d moved on. But I couldn’t argue with his logic and the empirical evidence of my friend’s successful day at the festival.

I should have planned out a new collection instead of turning Give the Lady a Ride into the first of the Circle Bar Ranch series, but no—I apparently like challenges and pulling out my hair. So let me share my thought process with you and tell you the ultimate results of this not-supposed-to-be-a-series series.

First, I’d heard from readers who wanted to know what happened to my characters after the book had ended. Since the plot took place in a matter of weeks, I couldn’t end my romance with a wedding. But I did end it with the promise of one, which I figured the readers would catch onto. Come to find out, they wanted to see it.

So, I wrote book two, The Final Ride, my Texas Association of Authors contest winner. Talon proposes to Patricia in a novel that reads more like women’s fiction than romance. So much for calling it a romance collection.

Second, some readers wanted to me to solve the cold-case murder of Talon’s first fianceé, Janet. This is the one I’m working on now. I’ve named it Ride to the Altar, and I’ve struggled with it so far. I submitted the early chapters to an award-winning mystery novelist/friend. She let me know in no uncertain terms or frugal use of red ink that Ride to the Altar is not a mystery. By any stretch.

Why is the genre tag important? Because it’s the first thing people I meet want to know.

“What do you write?”

In the few short moments I have the attention of a potential customer, I have to let her know that I write what she wants to read. If her eyes light up, I can give her the “elevator pitch.” When she picks up the book and examines it, I set the hook. But fishing starts with the right bait, and the genre tag is the bait.

So far, I can’t really complain. Sales are good. But don’t do this, kids. It’ll make ya nuts. Plan your series. Know what’s going to happen in each book so you can start planting the links from one book to the other as you write. Figure out what you’d call the series if you were faced with a street-load of potential customers with short attention spans, even if that’s not something you’d ever do. Knowing it provides clarity.

As for me, I’ve realized that the three novels of the Circle Bar Ranch series have one overarching theme—the need for couples to trust and communicate with each other. I’m going to work that angle into my pitch as I sell my Romance/ Women’s Fiction/Mystery-ish mishmash of stellar, must-read, award-winning novels.

Linda W. Yezak lives with her husband in a forest in east Texas, where tall tales abound and exaggeration is an art form. She holds a BA in English and a graduate certificate in Paralegal Studies. Thirty years later, she’s finally putting her degree in English to good use, combining it with her natural inclination toward story-telling to create fun, unique novels.