Whenever I’m invited to talk about the Threshold Series, one question keeps cropping up. How do you pick names for your characters? While it might sound like I’m dodging the question, the honest answer is … it depends! I don’t have one set rule. But I do have four different approaches. I’ll even throw in some bonus tips at the end.

Sometimes, I choose a character’s name because I want to give the reader a hook. The obvious example from the Threshold series is my protagonist, Prissie Pomeroy. She always wears dresses. She has excellent posture. She corrects her brothers’ grammar. In a word, Prissie is … prissy! Tying your character’s name to a fundamental personality trait can help your reader remember who’s who. This approach happens to be a classic, employed by authors like Charles Dickens and Nathaniel Hawthorne. 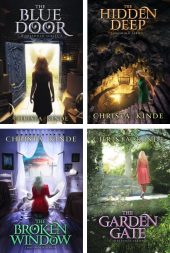 I find word origins fascinating, so I’ll often choose a name because of its meaning. And by often, I mean most of the time. For instance, Pomeroy means “apple orchard,” and Prissie’s family lives on one. Milo Leggett is one of the series’ angels; his day job is local mailman extraordinaire. So it’s entirely appropriate that Milo means “cheerful,” and Leggett means “messenger.” Researching the meanings behind names can help you find one that suits your character right down to the twinkle in his eyes.

In many cases, I’ll pick a name because it’s ordinary. I don’t know about you, but when I was in grade school, three girls in my class were named Jenny. To keep them straight, the teacher referred to them as Jennifer, Jenny, and Jen. So when it came time to name Prissie’s girlfriends from school, I tossed a Jennifer into the mix. Simply because I consider it commonplace. If your story is set in a specific time and place, dig a little. Find out what’s normal. Naming trends are your friends, and every place has them.

I was one of those little girls who kept a list of names that I planned to bestow on my children one day. Looking back, inflicted may have been a better word. When it comes to my characters, I regularly pick names I don’t care for. On purpose. For instance, I’m not all that fond of “Jayce” or “Ransom.” But Prissie’s dad’s a gem of a guy, and Ransom’s all kinds of fun to write. I don’t hold their names against them. By the same token, I didn’t name Naomi Pomeroy’s children. She did. So their names hold special meaning to her and Jayce. Not to me.

Once in a while, I’ll wish I could take back a character’s name, but that rarely works out. Names stick. And that means I’m stuck. In the Threshold Series, I have a Nell and a Neil in the same household. Their names are so easy to mix up at a glance. Also, I have a pair of guardian angels whose names both start with “T.” I recommend making things easier on your readers.

Every story has its own ambiance, and details definitely add oomph. Names are inherently personal, so you’ll have to deal with them on a case-by-case basis. Your characters will let you know if they’re willing to live with a name. And even if they’re less-than-thrilled with whatever you inflict, you’ll know if you’ve found a good fit. Because it’ll stick. And they’ll be stuck.

How do I pick character names? The honest answer is…it depends! I don’t have one set rule. But I do have four approaches. #ACFWBlogs @ChristaKinde Click To Tweet 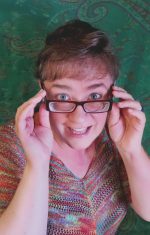 Christa Kinde writes studies, stories, and devotionals that bring truth into focus and give faith a practical spin. Her angel-filled Threshold series is complete in four volumes from Zonderkidz. She also publishes family-friendly fantasy under her maiden name, C.J. Milbrandt. More at CJMilbrandt.com and ChristaKinde.com.