Last year my nebulous-but-fantastic-sounding goal was to “write every day.” I did a pretty good job. Five or six days a week I opened my laptop and typed a few hundred to a few thousand words. After twelve months, my word count was pretty impressive. Unfortunately, my useful output wasn’t.

The first project I started working on soon became nothing but a list of alternate beginnings. A file held versions 1, 2, 3, 3.1, 3.2, 4, etc. Then another idea caught my fancy, and a second file filled with ways that new story could start. By the end of last month I had multiple files filled with many opening chapters, but nothing was completed. I had nothing to revise, and nothing to submit.

I know I’m not alone. Let’s call it First Chapters Syndrome. Maybe you’ve never finished an entire manuscript, but keep hopping from idea to idea. Maybe you’ve written a book or two, but they haven’t gotten a lot of interest, so rather than invest time in another entire book, you whip up a few first chapters, hoping one will catch an agent’s eye. Or maybe the excitement of a new idea keeps you going until the dreaded middle-of-the-book doldrums. Whatever the reason, an unfinished book is one that isn’t going to make it into the hands of readers.

So what can we do to change this bad habit? I asked a few prolific authors how they kept going. Here’s three of the things they told me:

2. Let go of perfection. Nothing stops progress like going back to make each word and line perfect.

3. Trust the process. Work through each phase of the story, even if it doesn’t feel right, until you type The End, then go back and revise.

Aristotle’s advice of well begun is half done may apply to many things, but not to writing. Our stories are our passion, and our God-given mission, but in order for us to tell our stories, we have to finish them.

What are your tips for finishing a manuscript? 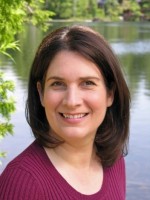 Rondi Bauer Olson is a reader, writer, and animal wrangler from Michigan’s Upper Peninsula. Her debut novel for young adults, ALL THINGS NOW LIVING, was a finalist in the 2012 Genesis Contest and is scheduled for release in 2017. Visit her on her website.