As a kid growing up in the ‘70’s, I lived to watch Scooby Doo. Little did I know that this first exposure to mystery stories would be a good foundation for trying to write my own. My very first attempt at writing a story was in second grade, and I wrote a homage (that sounds better than rip-off) to Scooby Doo on the front and back of a sheet of notebook paper. The boy I had selected to play the cowardly character like Shaggy took offense and threatened to tell the teacher. Not only was this my first story, but also my first time dealing with an audience and censorship.

Below are the four lessons I learned about mysteries sitting in front of the TV on Saturday mornings.

Although Fred, Daphne, Velma, and Shaggy weren’t complex, there was no way to confuse them with one another. Fred was the usually brave one with a plan. Daphne was pretty and danger-prone. Velma was smart, Shaggy was scared, and Scooby Doo was a scared dog. Those characteristics influenced how the gang solved the mystery, so plot points developed from character traits.

Much of the running time of a Scooby Doo episode was spent doing just that – running. All the fleeing from the villain of the week not only padded the episode, but placing the detectives in danger raised the stakes for reaching a successful resolution to the mystery. And even though for 453 episodes, Scooby and the gang had solved the mystery, when you’re a kid, you worry that the 454th time, things might go horribly wrong.

Shaggy and Scooby’s cowardly personalities added a lot of humor to each mystery. Humor usually makes a character more believable or likable. For most kids, Shaggy and Scooby were their favorite characters. Humor also adds a contrast to tense or scary situations and makes any story just more fun.

Last year, I introduced my kids to Scooby Doo, and they got as hooked as I did. My oldest is now trying to write a mystery with kids as detectives. I’ll have to ask who my novice writer has picked for the Shaggy character. I wouldn’t want someone so young dealing with censorship yet.

Everything I Need to Know About Mysteries I Learned from Scooby Doo by JPC Allen. #ACFWBlogs #amwriting http://www.acfw.com/blog Click To Tweet 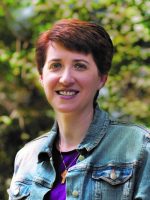 After her Scooby Doo homage, JPC Allen decided it was better not to tell people if they inspired cowardly characters. She is a 2016 semi-finalist for her YA crime novel The Truth and Other Strangers in the ACFW’s Genesis contest. A former children’s librarian, she loves to introduce tweens and teens to the adventure of writing through her workshops. She offers writing tips and prompts for beginning writers at JPCAllenWrites.com and on Facebook and Instagram at JPCAllenWrites. A lifelong Buckeye, JPC Allen has deep root in the Mountain State. Visit her on Facebook and Instagram.