I wrote approximately a thousand pages about a game show host who becomes the world’s first transhuman who becomes a fugitive who becomes a believer who becomes a hero who becomes an evangelist, sort of. Book three of my trilogy releases in September, and Chase Sterling’s quest culminates in front of a worldwide audience who, ready or not, receive fair warning that the Gospel message will not be silenced. Chase exists and endures to change lives. Not at all the way he did on page one of Wake the Dead, but in the way ­­­­everlasting.

For me, writing such a grand quest required a trilogy. No simple adventure would do. One book wouldn’t get my protagonist from egotistical to self-sacrificing, from well-dressed superstar to homeless outcast. From man to machine, sort of. I’m not sure I’ll ever write that kind of story again. It’s exhausting and it takes over your life. But I’m happy with the way things end for Chase. The changes he undergoes eventually change the world. Seriously. The whole world.

Chase becomes a global superhero, but I don’t intend to aim for that kind of far-reaching premise every time I build a story, because changing the world doesn’t matter as much as changing the reader. The morphing of a character from one state of mind or state of being to another should at least extend hope to the person entranced by the words on the page. If someone, anyone, considers that we who write Christian fiction might have something important to say within our arduous plots and cockeyed motifs, then we ought to provide a life-changing moment or two. Our characters, after all we put them through, should bolster our readers to survive their own adventures with a new outlook and a refreshed spirit. The triumph of a novel might be that it helps transform a small, private fragment of a big, scary world where real-life storylines don’t always meet desired resolutions.

When I said I might not ever tackle such a tale again, that’s not to say I have any plans to stop listening to the characters in my head. A whole new group of made-up, messed-up people have come along in need of major life adjustments, and I’m here for them. They’re a bit less speculative, so to speak, than my last assemblage. Not one of them is a transhuman, but my protagonist is going to experience something a little freaky. And it will change him. Maybe not in the way I’d like to see him change, but hey, it’s his story. I can only hope what he gleans from his adventure will sink into the searching heart of a reader, and change a little piece of the world. 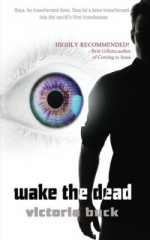 Victoria Buck is a Central Florida native. Wake the Dead is her debut novel. Killswitch is the follow-up to book one. Transfusion releases in September to finish the trilogy about the world’s first transhuman. Learn more about Victoria’s books at www.authorvictoriabuck.com and read her blog at www.victoriabuckunchained.com.