I heard a story by a former pastor many years ago. It’s a somewhat familiar tale, and you’ve probably heard it before.

The first woodsman smiled and said, “While you continued to chop, when you thought I was taking a break, I was actually sharpening my ax.”

I’ve heard it said that you should always be writing something. Don’t stop. If you’re stuck in your story, write something else. That doesn’t always work for me. Sometimes, I just need not to write. At that point, I watch old movies, or television, or I read others’ books. I’ve also begun to make sure I read non-fiction books that will enhance my spiritual growth.

There are different ways to sharpen your writing ax. Attend a writer’s conference, read a book about some aspect of the craft, or take a day off and do something else you like to do. Read for pleasure. You know what you like. Just do something different for a day, a week, or even an hour two. For me, I took a long break from writing fiction, (several months) and just concentrated on blog posts and reading other things.

Obviously, I may not be speaking to those on deadlines, but in a way, I am. Take a short break, even if it’s only twenty minutes or half an hour. Get away from the computer screen and fill your mind with some aspect of God or something else pleasant. Have a cup or tea or whatever your favorite drink is.
My ax is sharpened and I’ve begun to write my second novel, but not until I knew my first novel would be published. I’m older and I don’t wish to waste whatever precious time I have left on this earth (even if it’s twenty years), doing something that won’t come to fruition.

I believe we’re more effectual in our writing when we’re refreshed and renewed. Whatever works for you to sharpen your ax, do it. Your soul and spirit are as important as grinding out the daily word count. You might find you’ll be more efficient. 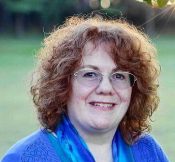 Donna L.H. Smith is a Kansas prairie girl transplanted to Lancaster County, PA. She is a graduate of Christian Writer’s Guild Craftsman program and holds both a bachelor’s and master’s in communications. For twenty-nine years, she’s been married to a wonderful man named Kirby. She’s been a freelance journalist, a chocolatier, and radio reporter. Now writing full-time, her first novel, Meghan’s Choice, is due out later in 2017.